The Shaggy Sunrise Cure For ‘No, Baba!’

No, Baba.” Who knew a six-year-old could use two words to destroy my one-and-only heart? But, ever since I got the new job and we moved to the new house in the new neighbourhood, my little boy’s been angry at me non-stop.

“Kamau,” I’d say at bedtime, holding up the Star Riders graphic novel No. 4 I just bought (I’d read him all the others and made different voices for all the characters), “want story?”

And him, all footy-jammies and stuck-out lip: “No, Baba.”

“Kamau,” I’d say at lunch time — downstairs to eat the lunch my wife’d cooked, instead of me cooking it, which he and I had done together almost every day since Suad stopped breastfeeding him — “wanna draw later? Or go water the tomatoes?” And him, snarling over his diced goat and fried cassava, “No, Baba!”

I was the first human being to hug him, snuggle him and smell him in all his perfect baby-tude after he joined the world. Been with him nearly every morning, noon and night of his life. Watched him grow from baby to toddler to pre-schooler to schooler… did all my pre-school parent hours and saw him learn to play with other kids, a thing you don’t even remember you had to learn until you see your first-born do it. I was there when he laughed his first laughs and stepped his first steps and skinned his first scabs.

And now, with a grimace or a mutter or a turned head, this boy can shatter me as easily as he spider-cracks spring- time frozen puddles.

“Meja, I know it’s killing you,” Suad told me after she tucked him in — which used to be my job — “but Kamau’s just little. I’m so proud of you that you got this great new job. But now that his Baba’s busy all the time….”

Which’s why I headed to the pound and came back with Sunrise.

My wife wasn’t exactly thrilled when the golden retriever walked in. Obviously, I should’ve consulted Suad. But she also’d been bugging me for years about getting a dog and I always said no because of a bunch of good reasons.

She said, “You would rescue a dog at the exact moment you wouldn’t have time to walk him.”

“Her,” I said, and instantly regretted the correction.

But then my boy ran up and hugged Sunrise like he didn’t even see me, like he’d known this dog his whole life but hadn’t seen her in a year.

And, for the next month, all Kamau did was talk to the dog and teach her whatever tricks he could find on YouTube and feed her and even clean up her poops (without complaining!). But he still kept shutting me out. Even when I could pry away 40 minutes from work to walk Sunrise with Kamau, I was just relegated to supervising. Or chaperoning.

But, by the end of that first month, we realized Sunrise wasn’t just getting fat from all the table scraps, but was pregnant.

“Why wasn’t she spayed?” frumped Suad.

“Mistakes were clearly made,” I said, neutrally.

When Sunrise finally rose and fell one night on the kitchen floor, I ran to wake up Kamau and cheered, “The puppies are coming!”

His eyes snapped open like he’d just heard Santa jangling on the roof. Downstairs, we plopped down to share the biggest event in Sunrise’s life, and in Kamau’s. My son was shocked at just how many puppies she’d been carrying and, by the time Sunrise was cleaning all seven of them with her tongue and they were enjoying their first ever breakfast, Kamau was still in his jammies but now in my lap, asleep but smiling anyway, and pressed against my chest like he’d never left.

Minister Faust is an award- winning author and best known for The Coyote Kings of the Space-Age Bachelor Pad. 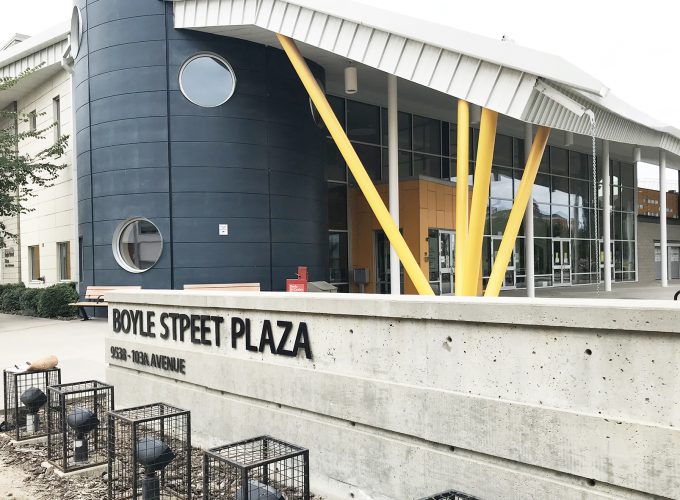