A writer remembers a parkade in the university area.
By Jennifer Quist | May 26, 2016

Behind a beton-brut highrise apartment building on the southeast side of the University of Alberta is a parkade. It’s less brutalist than the apartment tower, more just plain brutal. I moved there, into the Newton Place apartments, as a cold, small, lonely 18-year-old. Tenants told each other that, in the parkade’s dim, dirty stairwells, a woman had been raped. No one could say when, or who she was, or how it ended.

Whether the parkade rape was a news report or a cautionary fable, the aesthetic in the stairwells was certainly violent – lightbulbs in cages, putrid organic splotches in the corners, disembodied bloated spray-paint genitals, sexual curses scrawled on the walls to hex us on those rare nights one of us had a car she needed to park. We’d mutter about stray DNA and try not to touch the handrails. In the parkade stairwells, no one said anything about love.

I was driving a borrowed car, bound for the temporary tenant stalls just below the parkade’s roof. I’d never been behind the wheel inside the parkade before. The roof was low and the crowding of the cars lining either side made the roadway something like a tunnel – like the launch tube in the Battlestar Galactica.

If I was Lieutenant Starbuck, the man beside me in the front seat must have been Captain Apollo. We were wheeling too fast around hairpin turns, speeding upward, like we meant to charge up the ramps and fly out over the concrete half-walls. Apollo would be the father of my children, the co-borrower on the mortgage of the house we would share in the suburbs of this city. In the parkade, we couldn’t be sure of any of that. He was an undergraduate with nothing but incredible forearms and promises. It was good enough. It was good enough as we rounded the last corner to the topmost level of the parkade.

This was where the concrete ceiling was thrust upward on tall four-cornered pillars to correct the slope of the parking ramps, to make the rooftop flat. This was where the pitch and height and light of everything changed, flung itself up and out. This wasn’t piss and violence but the vault of a secret urban cathedral, an open-air apse that had been standing over our heads, over the filth and fear, unseen but here since the beginning. 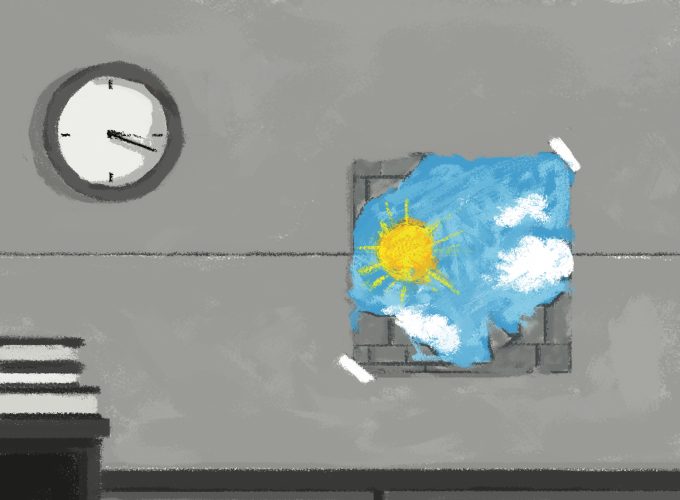