Jasper Place Curling Club gets ready for the curling season with a new mural
By Katrina Turchin | September 9, 2021

Jasper Place Curling Club is somewhat of an institution in Edmonton. The club has been in its location on 107th Avenue and 165th Street since 1958, yet Cathy Craig, general manager of Jasper Place Curling, receives phone calls frequently from people who claim to never have seen the 180-foot-long building when driving by.

“We knew, for whatever reason, we just weren’t visible,” says Craig. “So we’ve always looked at this big long wall and said, ‘If we ever have a position to paint a mural, we need to.’ And, so that happened this year.”

Craig, alongside the Jasper Place Curling Club Board of Directors, commissioned local artist Jill Stanton to paint a mural reflecting the history of the curling club and neighbourhood. The detailed mural features magpies on a fence, beer on a porch, a cup of coffee and other objects alongside curling imagery.

Jasper Place Curling Club is celebrating the finished mural with a Rock the Block party. Registered guests will receive a complimentary hamburger or hot dog, and additional snacks will be available for purchase. Bring the whole family and dance the night away to tunes from local cover band, Groove Project.

Jasper Place Curling Club’s Rock the Block Party is on September 10 from 6:30 p.m. to 9:30 p.m. The event is free to attend, but advanced registration is required for a complimentary hamburger. 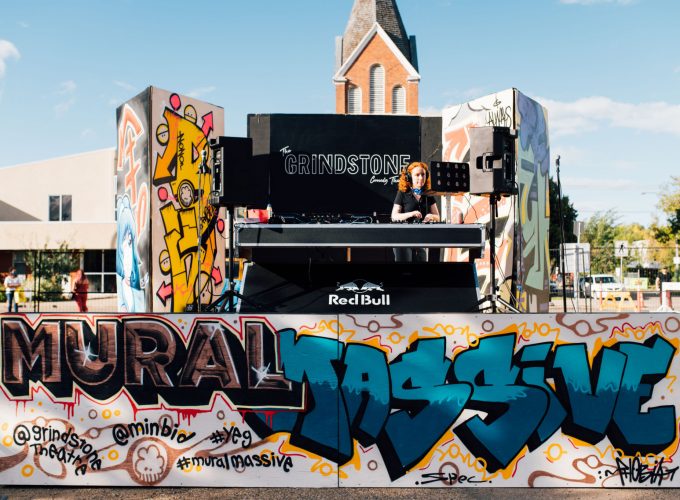