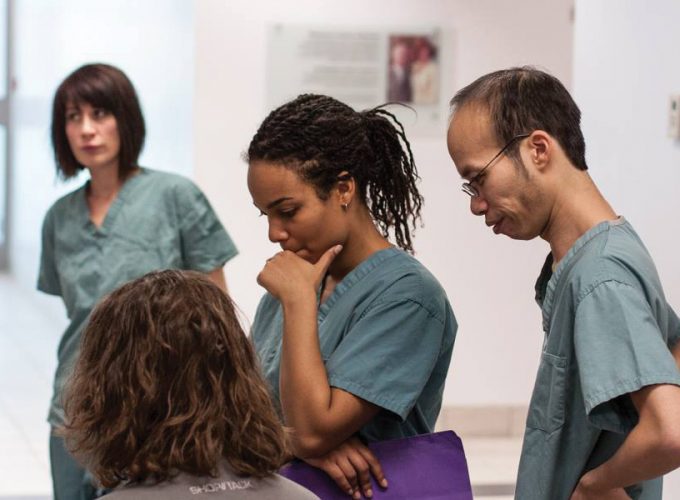 On this sunny afternoon, I’m underground, where I’ve stepped off the LRT. For a change, my destination isn’t points beyond. Not to work. Not to an appointment. It’s here. On a bench. I’m in Edmonton’s underground art gallery. Or is it a classroom? In transit, in transition, people stream past. Bits of conversation linger and overlap.

From here I could hop back on and ride to a square named Churchill. From there, drive to a street called Gretzky. Or cross the river on a bridge named Walterdale. All men of accomplishment, whose stories are well known and often told.

Today, in a station named Grandin, I’m thinking our city is ready to tell new stories, and listen to unheard voices. I see the signs here, in Grandin Station. The signs are in the art on the new murals I see around me. It’s not just the art; it’s the work and the thought that went into putting a new perspective, an aboriginal perspective, in a public place.

I love this new art at Grandin Station. Franco Albertan artist Sylvie Nadeau’s new work, and the pieces by First Nations and Mtis artist Aaron Paquette. I applaud you both for this beauty and for your storytelling, and I applaud all who made it happen.

In a city, in a country, in a collective conscience where it feels like aboriginal people are either misunderstood or invisible, this art, I notice. It’s the beauty of the children. The bold colours, the animals and spiritual symbols. The refreshing sight of those brown faces.

It’s important the art is contemporary, and some of it is by a First Nations and Mtis artist. It’s important that it isn’t the romanticized, homogenized, vanillacized art that we often see in depictions of native people in North America. Let’s show the history, the real history, told by them, and from their point of view. Let’s show the here and now, and not just the there and then. It’s something to consider as the Royal Alberta Museum ponders how to change its displays on Alberta Aboriginal history in its new downtown location.

For inspiration, we might all visit this underground ode to a significant part of Alberta’s past and present. It is part gallery. It is part classroom. Let us all stop and linger here at Grandin Station. Let us see and hear more of the untold and the uncelebrated in our city. And in the pauses between trains, imagine a time when buffalo pounded past on the earth above.

Portia Clark grew up in Nova Scotia and has lived in Edmonton for 14 years now. She hosts the afternoon show, Radio Active, on CBC Radio in Edmonton. She’s an occasional painter; so far, her paintings have only been shown at home, on her living room walls.

The 2021 municipal election takes place this coming fall.
33% City needs to hold the line on taxes
50% Am willing to pay more in order to increase/maintain services
17% Want my taxes reduced, even if means cuts to services/city staff
0% No opinion/this issue is not important to me
Current results