A Wedding Without Borders

The bride and groom come from very different cultures, but they found a way to make both their families feel at home at their nuptials.
By Eliza Barlow | February 11, 2010

People The Alberta Prime Minister of Canada When Harper leaves, what portends for Alberta’s influence in Ottawa? Read More

People Rose-Coloured Products How to know where your dollars are going in the fight against breast cancer. Read More

As newcomers streamed into Alberta during the heady 1970s oil boom, two families immigrated to Edmonton from vastly different corners of the globe: One from the Caribbean nation of Guyana, the other from southern India.

Both clans settled in Castle Downs, but two of the children they would have – Craig, from the Guyanese family, and Beena, from the Indian – only crossed paths in 2007, while studying at MacEwan University.

The pair had mutual friends and ended up taking a psychology class together. Beena says her “heart stopped” the first time Craig walked past her in the hall.

“There was a feeling in my gut that there was something different about him,” says Beena, now 30. Craig shot a hilarious video spoofing Anchorman: The Legend of Ron Burgundy for a class assignment. When Beena saw it, she was hooked.

“She could read me like a book from day one,” he says. Even so, it wasn’t until the year after graduation that the pair exchanged numbers at a pub. Craig asked Beena out a few days later. After their first date, they each told their friends they knew they would marry each other some day. The courting couple – now Mr. and Mrs. Thomas – noticed a ripple of recognition when their families were finally introduced.

“We had never met, but we’d lived five minutes away from each other our whole lives. Our brothers were on the same soccer team,” says Beena.

Decades later, those brothers would be among Craig’s groomsmen when he married Beena, in a lavish wedding that combined traditions of both families along with elements of western culture.

“Today, two families become one. Please pick a seat and not a side,” read a notice greeting approximately 400 wedding guests at All Saints’ Anglican Cathedral on June 22, 2013.

Marrying their cultures proved complex: Though from India, Beena’s family are Syrian Christians who speak Malayalam. Craig’s family members are English-speaking Catholics who identify with the West Indies, despite Guyana technically being part of South America.

The couple wanted to honour as many of their families’ customs as possible, while keeping the wedding clean and modern. “I didn’t want it to look like a Bollywood explosion in there,” says Beena. “We wanted to do it in a way that was true to us.” Luckily, Craig and Beena were on the same wavelength – as they have been since the day they met – when it came to planning their wedding.

And it’s that bond that has guided them through their greatest challenge – and the greatest irony of their relationship: Soon after they met, their careers took them further from each other than they had ever been.

Beena attended graduate school in Idaho and is now completing her PhD in psychology in Atlanta. Craig is working as a financial adviser in Whitecourt. This is their fifth year living apart. But Beena and Craig began preparing for the distance challenge early on. They committed to staying in close contact, especially through FaceTime on their iPhones.

They had a similar level-headed approach when it came to the wedding planning. When they got engaged at The Melting Pot in December 2010, they agreed right away they’d need help planning their dream wedding. They enlisted Jennifer Bergman of Jennifer Bergman Weddings as their wedding planner.

“I love doing multicultural weddings,” says Bergman. “The biggest challenge is ensuring that each culture is represented accurately, and striking a balance between the two.”

Bergman recommends sitting down at the outset to figure out each person’s “must-haves.” For Beena, it was important to get married in her church, with her priests, according to her family’s Syrian Christian faith. So, Craig converted from Catholicism to Anglicanism. Because half of the ceremony was in Malayalam, Beena arranged for the programs to include English translations. “I felt we really met halfway,” says Craig.

One of Craig’s non-negotiables was for the wedding cake to be traditional Guyanese black cake – a rum-infused, dark fruitcake he describes as an acquired taste. His mom made the cake and his aunt iced it with marzipan and white flowers.

“It’s more so the reception where our culture comes out, being loud and having a good time,” says Craig. “It’s carnival culture – dancing in the street. It’s like Cariwest, but 10 times, 50 times more.” For their reception at Meridian Banquets, they tempered the flashier, traditional colours with creams and golds for a contemporary feel.

Beena changed from her white Blue by Enzoani wedding dress into a lengha she had bought in India, on a special trip the previous August to gather items for the wedding. Instead of traditional red, she chose one in shades of purple and blue, in keeping with the colours of the wedding. She also brought a sari back for Craig’s mom.

The meal was buffet style with a variety of traditional and Western choices – butter chicken and naan alongside salmon, chicken and beef. A dessert spread featuring a s’mores bar added a whimsical element to the party.

At the end of the evening, the stresses over, Beena and Craig partied the night away with their friends and family, some of whom had flown in from India and England for the celebration.

“It was a joyous occasion to spend time with all these people we don’t get to see very often,” says Beena.

Mr. and Mrs. Thomas hope to find jobs in the same city when Beena finishes school this spring. Let’s hope it’s a piece of – black – cake. 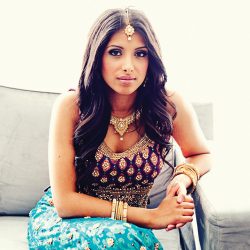 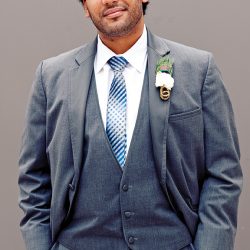 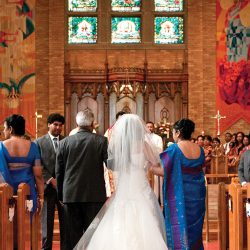