Remember childhood science fairs and how someone always created a volcano with baking soda poured into vinegar to simulate an eruption? Alan Nursall remembers that project so well that he decided to super-size it. He built a 7.1-metre, or almost 24-foot-tall, volcano and filled it with 700 litres of vinegar, then used an excavator to dump in 150 kilograms of baking soda. This science fair experiment earned him a Guinness world record in 2012.

This is just one of the many experiments the Edmonton-born-and-raised science enthusiast conducted over the past 18 years working with the Discovery Channel’s Daily Planet, where he has his own segment called The Alan Nursall Experience. Whether he was hunting for scorpions on dark Arizona nights, trying to extinguish a fire with a vacuum cleaner, or driving through a puddle at 95 kilometres an hour to learn how to survive a hydroplane, there were very few things that Nursall wouldn’t dive head-first into for the sake of exploring science.

But Nursall’s Daily Planet segment isn’t the only thing he’s done involving a reckless plunge. Recently, he returned to Edmonton after living away from his hometown for more than 30 years. He was appointed the new CEO of the Telus World of Science, bringing his adventurous curiosity of science to some of the museum’s upcoming exhibits.

Though much of Nursall’s previous work has been based throughout Ontario, the root of his scientific curiosity is firmly grounded in Edmonton. Nursall’s father was a professor of zoology at the University of Alberta, the same institution where, in 1981, Nursall finished his master’s degree in geography. He moved out east to attend the University of Toronto – originally intending to finish his Ph.D. But he wound up with a job offer so tempting, he dropped out to take on the challenge.

Nursall landed in Sudbury, Ontario, and helped open the Science North Science Centre in 1984, coincidentally, the same year the Telus World of Science began operations. He worked in Sudbury for 23 years. Halfway through his tenure, in 1996, he received a call from Discovery Channel.

“At the time, the show was still called @Discovery.ca, and they looked across Canada to find people who could contribute to the show,” says Nursall. He explains that he tested out viewer-submitted ideas for windshield scrapers the first time he was on camera. But the segment almost didn’t happen. “When we were supposed to film, it was plus-five degrees outside and raining. We were able to delay shooting for four or five days and we got the segment we were looking for.”

Nursall’s natural charisma and comfort speaking in front of the camera was quickly recognized by Discovery Channel and he was offered a regular segment with new episodes being filmed each week, even though he had no formal training in broadcasting or acting. Maybe he was channelling a bit of his sister, actress Catherine Mary Stewart (who graced the cover of Avenue in June, 2013), into his regular performances.

“I don’t know, maybe it’s a family trait,” Nursall laughs. “When I get in front of the camera, I just kind of go for it and it works out.”

His frenetic forays into science have left their fair share of injuries. In 2011, Nursall was filming a segment about the physics behind a figure skater’s triple-axel. While getting ready to film, the cameraman yelled out, “Hey Al! Do something zany!” Nursall promptly tripped on his own skate and landed on his shoulder. He wasn’t able to move his right arm for the rest of the day.

Nursall left Science North in 2007 and worked as an independent consultant for science museums while he continued filming segments for Daily Planet. The call to work closely and directly with a museum started to hit Nursall again and, in 2013, he found a position back in his hometown that perfectly fit what he was looking for.

Though working with the Telus World of Science will be much lower impact than his work with Daily Planet, Nursall remains just as immersed in what’s upcoming at the Telus World of Science. He explains that the options of professionally assembled exhibits available to the facility are huge. But he narrows down the options by looking for exhibits he believes will resonate strongly with audiences,while still having a firm foundation in science.

Indiana Jones and the Adventure of Archaeology, which opens October 11, is a prime example of what Nursall looks for in a good exhibition. He recognizes that its strongest resonating point is its distinctive name and iconic imagery. But, it also incorporates the fundamental theories and practices used by archaeologists, giving participants a chance to take part in a quest throughout the 10,000-square-foot exhibition space. Visitors learn the basics of archaeology and even encounter real artifacts. It’s the perfect balance of pop-culture memorabilia and education, held together by nostalgia and emotional attachment.

Fans of Indiana Jones tend to be a bit older than the fans of previous pop-culture affiliated exhibitions, such as Star Wars Identities: The Exhibition and Harry Potter: The Exhibition, but Nursall wants to draw in as many different people – from different age groups and interests – as possible.

“Kids bring their parents, adults bring their friends and relatives; a lot of tourists stop by,” Nursall explains. “The Telus World of Science has a powerful connection to this community and I know that Edmontonians want to see it succeed.”

Nursall’s curiosity is as endless as the huge number of science experiments that he can’t wait to try next. “I’ve flown in all sorts of things – I’d like to fly supersonic,” he says. Nursall continues to travel and film with the show a couple of days a month. But his creative energy and scientific intuition will be tested just as thoroughly back in his hometown and working in his new CEO position.

“I’m already being told that the Telus World of Science wants its own Guinness World Record,” Nursall says. “We’ll have to see what I can put together in this space.” 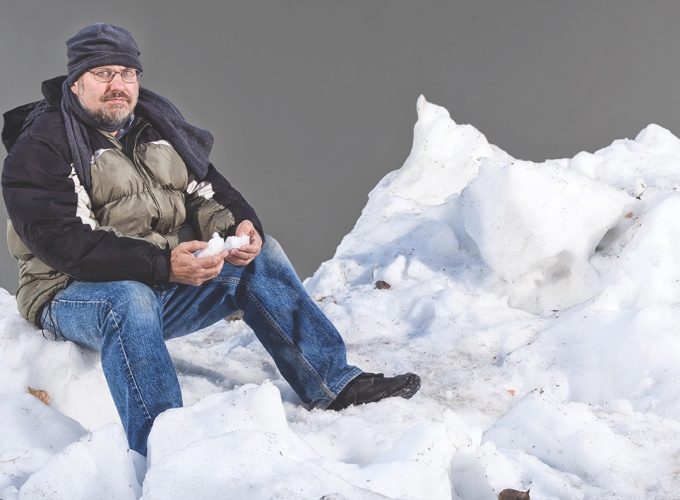