Clothing with a Conscience

Sustainable fashion is becoming a global movement, but is Edmonton ready to be a place of change?
By Caleb Caswell | February 12, 2010 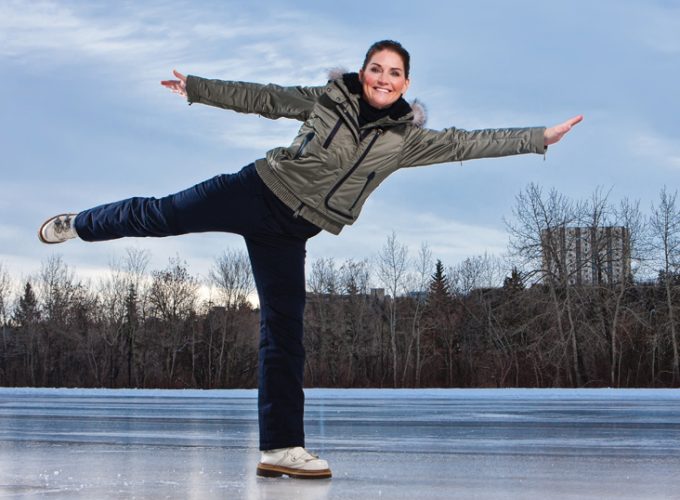 When it comes to the idea of environmental impact, some of the few places we think to look are in our dressers. There are a few misconceptions when it comes to environmentally friendly clothing. For example, what comes to mind when you see the term “sustainable fashion?” Is it an image of ropey, earth-tone hemp? Someone knitting his own socks? Or maybe you picture one of those Boho, free-spirit types; the kind that strokes a dreadlock while bragging about her skirt made from 100-per-cent organic tree moss?

In reality, sustainable clothing is available for the office and even the office party. Edmonton plays host to a number of designers and consumers interested in halting the frenetic pace of the fashion industry. This comes after a series of public disasters: In 2011, Greenpeace accused Zara of using toxic chemicals in its clothing; earlier this year, a Bangladesh factory, contracted to make clothes for Canada’s Joe Fresh line, collapsed.

However, despite all the best intentions, retailers of sustainable goods have trouble keeping their doors open in our city due to several complications. It all begs the question: Is there a place for environmentally responsible clothing in our city, or is sustainable fashion in Edmonton largely unsustainable?

The meaning of sustainable fashion varies from person to person, depending on the values of the designer or consumer. There are those who limit their carbon footprints by locally sourcing all of their textiles and production, while others forego chemical dyes and colour their fabrics with natural ingredients.

However, one of the best ways to be sustainable is to design clothing that’s worth holding on to for long periods of time. “Some girls buy three things a week, knowing they’re only going to have it for a month or two months, and next season it’s going to be thrown out or given to Goodwill,” says Edmonton designer Malorie Urbanovitch. “It sets the precedent for clothes being disposable items – and they’re really not.”

Urbanovitch designs her clothes to be timeless. The big picture is to break the fashion industry’s trend cycle, which requires consumers to constantly stay in season by purchasing new clothes. By focusing on style that’s timeless and personal, consumers buy less, limiting the amount of materials and energy the industry uses when producing clothes.

“It’s impossible to compete with fast fashion empires like Zara and H&M, because they’re spitting out new styles every day,” says Urbanovitch. “My line is based on the idea of making each piece an investment.”

Men have it much easier when it comes to bucking seasonal styles. “I would suggest that men’s clothing [particularly suits] are far more sustainable than women’s,” says The Helm Clothing co-owner, Brad Kahler. “Our garments last longer, we pay more for them and they’re easily tailored. We’re going to get a whole lot more wearings out of a suit than a woman is going to get out of a dress in one season.” The owners of The Helm also employ an onsite tailor to make sure a customer’s suit fits properly, helping to make the garment last.

However, limiting yourself to a small amount of clothing doesn’t automatically make your closet a shrine to the environment. Ardent supporters of the sustainable movement say that addressing the problems within clothing culture only addresses a small part of the issue when it comes to halting the textile industry’s devastating environmental effects.

Cotton has become the fashion industry’s crude oil. A study done by the Environmental Justice Foundation in 2007 found that cotton production – which takes up only 2.5 per cent of the world’s cropland – is accountable for 16 per cent of all pesticides used worldwide. This comes to nearly $2 billion spent annually spraying insecticides in Third World countries. The study also found that a lack of adequate water filtration systems in these countries led to chronic poisoning in workers, children and livestock in the area. This, along with recent world shortages in cotton, motivated some designers to begin using fibres that can replace the dirty crop.

Now, there are several farms in America, Turkey, India and China that specialize in growing organic cotton, reducing or eliminating their use of pesticides and chemical fertilizers. And there are also designers who are invested in going to source countries to find natural fabrics from where they’re traditionally grown.

Maggie Walt of Maggie Walt Design sources her fabrics primarily from India, Indonesia, India, Vietnam and Nepal and is able to boast that her cashmere jackets and shawls are actually from Kashmir. Walt visits the factories that weave her fabrics four months out of each year, and her brand of sustainability is in supporting workers in Third World countries and making sure production practices are fair.

“When I buy silk, I’m trying to buy silk that’s specifically from that area, such as pashmina,” says Walt. “Pashmina is a certain cashmere that comes from a certain area. You cannot buy a real pashmina for $10 [in Canada] ,you just can’t. It has probably come from China and they’re copying the Indian weaves.”

Walt also finds it difficult to believe how cheap the clothing from box stores can be. “There are major retailers that are selling clothes for less than what it would take for me to buy the fabric,” says Walt. “And I just don’t know how they could be doing that.”

As families mourned for those lost in the Rana Plaza factory collapse in Bangladesh in April this year, few breathed heavier sighs than those in the sustainable fashion industry. Though many of the workers in the plaza had evacuated as cracks formed throughout the building, it was reported by the Daily Telegraph that after being evacuated, workers were ordered back to their jobs on the top floors – floors constructed without a permit, that were never designed to handle heavy, vibrating machinery. The joke of cheap, overseas labour – once personified by the “farty and bloated” Jacobim Mugatu of 2001’s Zoolander – became juvenile as the death count reached its final tally of 1,127.

This may have been news to the public, but students in fashion design are educated in the fashion industry’s internally accepted abuses. Former Edmontonian Erin Polowy recently graduated from Kwantlen Polytechnic University in British Columbia with a degree in fashion design, and says the school regularly brought in guest speakers to talk about industry issues and alternatives.

“It wasn’t a career I wanted to enter,” says Polowy, “because I didn’t know how I could feel OK working in an industry that does such terrible things. But I realized that if I wanted to help make change, being in the industry is the best place to be.” Polowy chose to focus her thesis on slow fashion, a particular branch of the sustainability movement that focuses on how to slow the rate of consumption, such as through “upcycling” garments (taking old styles of clothes and modifying them to fit current trends).

Her clothing business, like many others, operates on a small scale since she keeps work in-house. This makes it difficult to supply retailers with sustainable alternatives, as a full collection of clothes made in each size and colour for a collection takes too long to consistently stock a supplier.

A bigger issue is that it’s impossible to create clothing that is 100 per cent sustainable in Canada. We lack many of the basic materials and production facilities to create environmentally safe textiles. Shipping clothing from overseas creates a large carbon footprint, and committing to in-house or local production on a larger scale raises costs that make it difficult to compete with box-store prices.

This can be especially troubling in Edmonton, where boutique strips, such as Whyte and Jasper Avenue, are out of commission during our long winter months. Many of the designers and retailers mentioned here admitted that, while they have found some support in the Edmonton community, the city has a pervasive mall mentality.

Nokomis, a boutique that specialized in clothing made in Canada, closed its doors in January of 2011. After eight years, the store wasn’t able to survive the economic recession paired with Whyte Avenue’s high rents. “I think Nokomis was on the early edge of the sustainable fashion movement,” says former owner Jessica Kennedy. “The idea of buying sustainable and local products – of food trucks and farmers’ markets and pop-ups – are newer concepts [in Edmonton] within the last four or five years. So it was an uphill battle.”

There is also the issue of pricing for high-quality clothing. Urbanovitch has committed to using many ecological fabrics in her line, and should the price go up, so be it. And Walt closed her shop in August after 10 years on Jasper Avenue, and will be focusing on selling her wares online and working from pop-ups. Many of the designers find their prices to be fair. “If you can buy a Diesel t-shirt for $160,” says Walt, “then you can get a piece that there’s only one of, and the fabric is hand-painted.” But it’s the absence of inexpensive items – the kind only large-scale brands can afford to price so cheaply – that makes it difficult to stay in business.

Kennedy and Walt have both moved to pop-up markets like the Royal Bison Art & Craft Fair, the Mercer Collective and Make Something Edmonton, something many designers have turned to in order to grow their customer bases before approaching retailers.

There are still some sustainable retailers in Edmonton. Andrew Gonzalez got his start selling designer clothing in a tent outside farmers’ markets. After, Gonzalez opened his shop, Lucid Lifestyle, on Whyte Avenue. He carries a range of sport, casual and evening wear, and makes it less about the message of sustainability, and more about the clothing.

“There’s no writing on the walls; there’s no one telling you to floss or stretch, like Lululemon,” says Gonzalez. “And the store’s not what you’d imagine a hemp store to be – it’s not all beiges and granola.” Gonzalez admits that some of the pieces are only partially sustainable, and might be better termed as “thoughtful apparel,” but it’s still a start. “I wanted it to be mostly sustainable and have as much Canadian stock as possible, but not to limit myself.” A blending of products make the store commercially viable, but the market for environmentally friendly clothing isn’t enough to support a store on its own.

The question of sustainability in fashion is too complex to solve within the industry. There’s also the catch-22 of marketing in a way that encourages your clientele to limit how much of your product they purchase. However, the movement for sustainable fashion continues to grow, and designers choose to continue offering cities like Edmonton a sustainable option.

Colours of the Rainbow

Erin Polowy uses natural materials to dye her clothes for health reasons, but also for the look. “If you look at a naturally dyed piece of fabric, it has a warmth to it that’s difficult to get from a chemical dye. It’s a bit richer, and the colour can have some variation in tones.”

There’s a source for every colour:

Rachel McQueen, assistant professor of human ecology at the University of Alberta, offered a few textiles that are popular as an alternative to cotton.

Hemp – doesn’t need as much water or pesticides as cotton, and can be grown in Canada.

Bamboo – while labelled as a rayon because of the intense process required to break down the fabric, it grows quickly and is the most renewable form of rayon.

Banana Leaf – as the plant is also grown for food, the plant serves a dual purpose.

Lyocell – created from wood pulp, the trees used as raw material are left alive after the harvesting process.