He is known to Edmontonians as a fashion guru, but his heart belongs to the farm
By Shauna Scott | July 1, 2011 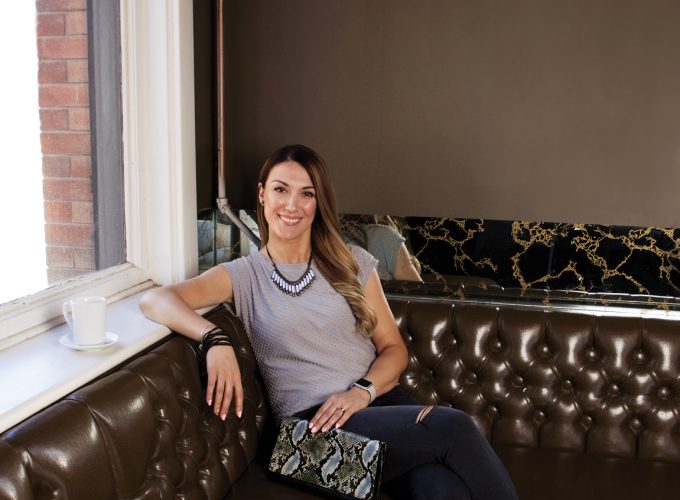 Style Style Q & A: From A Culture Of Fashion Jelena Bojic brings her European sense of style to the prairies. Read More

Above: Suit and shirt by Sand Tie by Ted Baker Watch by Skagen

John Chwyl’s road to fashion was paved with many careers along the way. He moved to Edmonton from Edson, Alta. in 1977 to begin a career in banking. That’s right, the “Fashion Guy” started out as a management trainee with the Canadian Imperial Bank of Commerce. He made his mark in the financial world for six years, but took a stand on its dress code and left because he insisted on wearing clogs and wide-leg pants, which didn’t fit in with CIBC’s policy.

Realizing the corporate world wasn’t his thing, he picked up a pair of scissors and became a hair stylist. This transitioned to a part-time modelling career, although Chwyl says, “I never knew why anyone would pay me as a model, but what the heck!”

His career in fashion took a turn in 1993, while he was modelling in a bridal show. The fashion show director at that time had a blow- up with everyone when things weren’t going well, and Chwyl said he could do a better job. Darrell Derk, owner of Derks Formals and the executive producer of Bridal Fantasy, thought so, too. So the next year, and every year since, Chwyl has directed, produced and choreographed Bridal Fantasy. He formed Keisha Productions to pursue his passion and was hired by West Edmonton Mall to produce its fashion shows until 2010. He now hosts a weekly style segment on Global TV and is the director of marketing for Kingsway Mall.

After he wraps a day in the fashion world, he heads to his rural home 75 minutes southwest of Edmonton, where no one cares what he’s wearing. He shares a farmhouse on 160 acres, purchased in 1990 as a weekend retreat, with his partner of 29 years, Tim Grahn. Seven years ago, they built their dream home on the property, sold their Edmonton house and now enjoy the solitude of their land.

Above: Vest and pants by RW&CO. Shirt and shoes by Hugo Boss Belt by Mexx Socks by Ted Baker

You’re known in Edmonton as the Fashion Guy. How did that moniker come about?

Years ago I had just started doing some fashion segments on television and was in a restaurant, when our waitress came up and said, “Hey, you’re that guy, you know, that fashion guy.” Someone else walked by a few minutes later and said, “You’re the fashion guy on TV!” My colleague said, “You need to brand yourself as this because it’s a great title and people are using it.” I then became the Fashion Guy.

What do you love about fashion?

I love how fashion can positively affect the mood and confidence of a person. When I do makeovers or dress “real people” as models for fashion shows, I get such a good vibe when they put on the new clothes. It can have such positive results with such simple and basic effort. You can see them stand taller, and you see an obvious boost in their confidence.

I’ve made a conscious effort to never focus on labels and not talk about designer names because it then becomes about that name or label and not about the fashion. Fashion should be a fun and exciting part of your life, but not be your life.

Above: Jeans by H&M Shoes by Sperry Top-Sider T-shirt by RW&CO.

What is your style?

Conservative with a quirky, casual-business slant. I like really interesting pieces of clothing. Here’s what I love to wear: a pair of casual pants, a cool, comfortable shirt and a sweater.

Do you feel pressure to dress well all the time?

I want to make sure whatever I’m wearing is clean, coordinated and looks as good as possible. When I meet people they think, “Oh my god, he’s critiquing me from head to toe, what do I look like?” This couldn’t be further from the truth because I believe you’re going to look good as long as you feel comfortable in what you’re wearing. Although there are some exceptions, like MC Hammer pants which are, regrettably, coming back!

Do people on the street ask you for fashion advice?

Yes, and I would say if you’re asking me for fashion advice then you must be prepared for the answer because I will be as honest and as truthful as I can. I was at a wedding where a woman asked me what I thought of her outfit and I said, “It’s fine.” She kept persisting, and then asked, “No, truly what do you think of my outfit?” I told her it wasn’t the most appropriate choice for a wedding, but more for a nightclub. And then she wasn’t happy. If you ask me the question, you got to be prepared for the answer.

What is your best fashion advice?

Be comfortable in what you’re wearing, make sure it fits and it’s in good condition. Also, don’t get hung up on numbers. I tell people the size of your garment is on the inside and the only way others are going to know is if you tell them so buy the size you need to buy.

Above: Shirt and sweater by Jack & Jones Pants by H&M Shoes by Philip Sparks

What’s one of your most prized fashion possession?

A three-piece Ted Baker suit in brown plaid. When I bought it, there was no sign of three-piece suits locally, so it was a pretty bold and daring move.

Here’s what I find really interesting: When you’re in the city you’re the Fashion Guy, and when you go home to your farm west of Pigeon Lake you become the “Farming Guy.” It doesn’t really fit the image does it?

I don’t talk a lot about my private life, so people are shocked when they find out I’m a farmer and I can actually build stuff and I’m OK to get my hands dirty. Even my parents were shocked when that happened. I didn’t realize how much I was going to enjoy it and it’s been amazing. What drew me in was relaxing nights around a campfire and peaceful days in the woods away from the hustle and bustle of the city. I got used to the wild animals, bugs and solitude and fell in love with it. You get such a profile from TV and people think they know you, but that’s all they know about you, and when they find out this other side of you, they’re amazed.

Tell me about life on the farm?

Our house sits on 160 acres looking down on a creek with lots of nature and it’s beautiful. Tim and I have five horses, 20 chickens, one farm cat and our purebred farm dog, Neeko. We had turkeys, they’re in our freezer, but we’re getting more. We also have a garden so we try to grow all of our vegetables. Whenever possible, we try to live off our land because we know what’s gone into growing it.

Describe a day at home?

I feed the animals and put their hay out. I mow the lawn, tend the garden and collect the eggs. I do everything that has to happen there.

I live in jeans and T-shirts on the farm. Throw in some rubber boots and flip-flops, and that’s my wardrobe.

What do you enjoy most about life on the farm?

Above:Shirt, shorts and shoes all by G-Star Raw Sunglasses by Prada

Book Tales of the City by Armistead Maupin

Drink Soda with a splash of cranberry