The Expert: What I Know About … Costume Design

She's been creating the costumes for the University of Alberta's media-room performances for the past 25 years.
By Caroline Barlott | February 8, 2010 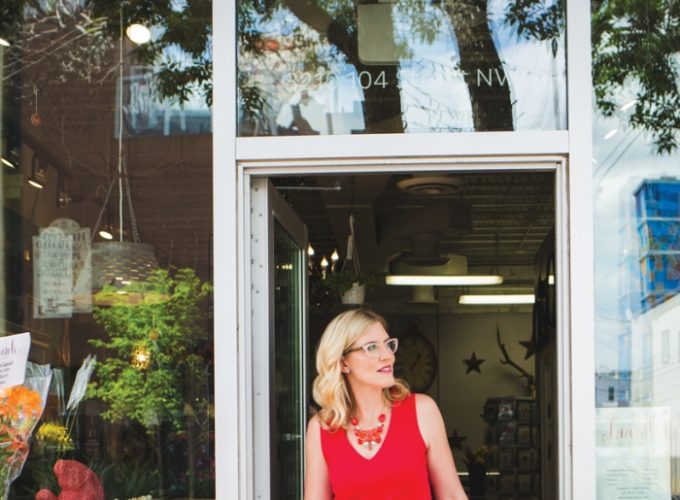 Experience: Rows upon rows of costumes from years of productions fill the expansive space that is the University of Alberta’s wardrobe room. Historic undergarments occupy one area, and sleek suits another. Shelves of hats – big ones, small ones – line the walls. It’s the space where Karen Kucher spends a lot of her time. She’s been creating the costumes for the University of Alberta’s media-room performances for the past 25 years.

Over the years, she’s also done costuming for the Timms Centre for the Arts, the Citadel and the Edmonton Opera. She’s made costumes for feature films including flight suits for The Fantastic Four and the Santa hat in Christmas in Wonderland. But years ago, she was on a very different career path – she spent 21 years as a letter carrier. In 1997, she decided to take a one-year leave of absence to see if a two-year Red Deer College costuming program was right for her. She enjoyed it so much, she officially quit her job, and continued her education, taking workshops in millinery – the techniques involved in hat making – and going on to take two master courses in the craft. Now, she spends her time creating everything from hats to shoes and all the clothes in between for about eight plays per year.

-“It starts with a drawing from the designer. I look at the drawing and decide what needs to be done from that. Then, we measure the actor; and try to figure out what they need in rehearsal first. They need to know how to move in certain items like a corset, which is really restricting, or a hoop skirt, or shoes, which can change the actor’s movements onstage. From this, we decide if we need to make any adjustments to the costume.

-“We need to make sure the costume looks good, but also works for the stage. Actors need items that can quickly be changed into from one scene to another. So, I’d sew the buttons on normally, and then underneath would be snaps or Velcro. So, they can quickly get in an out of the outfit. For a pair of shoes, you might switch out real laces for elastic ones, so they’re easier to get in.

– “I need to wear a respirator and gloves when I’m working with the chemical that stiffens the fabric used to make a hat. I work in the paint room where we have good ventilation. But people didn’t have that knowledge in the past. So, that’s where the term ‘mad hatter’ came from. People were actually damaging their brain cells from breathing in the fumes.

-“You don’t put white on stage, because it’s too bright. All you’ll see is the white, otherwise. So, you can dye the fabric. In order to be able to dye it, it’s easier to use natural fibres. So, cotton, or silk can be dyed with dyes that aren’t as toxic. We have a room where we specifically view the costumes under certain lights – gel lights, or black lights – to see how the outfits will look on stage.

-“Theatre doesn’t always do typical hats; they’re often very stylized. One of my favourite hats that I made was for a show called Spine. It was a Cleopatra headpiece, and we had a black wig on top, and then these long horns that came out of the top of it. And between the two horns was a strobe light – the actor could actually reach her hand in and turn it on. So, I’m working on it, and running down to props and I had to get the lighting guy to wire it for me. So, it’s really a team effort.

-“Within the wardrobe department, we all rely on each other’s expertise. We all have a base knowledge in all of the different areas – from dying fabrics to making shoes, making hats and cutting fabrics. But we each are specialized so one may be an expert in dying fabrics while another is in millinery.”