From canvas to clothing, Darren Jordan is all about self-expression.
By Adrianna MacPherson | February 11, 2010

Style Style Q&A: Bold Choices When it comes to her music career and fashion, this songbird isn’t afraid of taking chances. Read More

Style Fruits of the Loom The handmade movement sees a resurgence of people embracing textiles as an art worthy of respect. Read More

Darren Jordan, all at once, is a painter, curator, Caribbean, Canadian, expat from England, husband, father, youth care counsellor at the Royal Alexandra Hospital, nerd, sartorialist and rum enthusiast. He listens to hip-hop, soul and jazz, but also country (“white man’s reggae,” as his father once described it). He frequently employs quotes from Shakespeare in conversation, amidst explanations of why Spider-Man is one of the more relatable superheroes. He’s a breakdancing b-boy who grew into a Renaissance man and, once a year, these expressions of himself coalesce into his role as curator of Edmonton’s 5 Artists 1 Love art exhibit.

Held every February in celebration of Black History Month, five artists are chosen to represent Edmonton’s multifaceted black community. The art included covers a range of genres and media. He has paired opera singers with rappers, spoken word poets with painters. Each arrangement brings something you may not have expected. Does it challenge? Does it inform? Does it portray an elegant taste?

The same can be said for his wardrobe. It’s not the pieces themselves, but the way they’re put together that bring out the avant garde in his clothing. Classic style juxtaposed with modern patterns, a suit redefined by a splash of colour from a bow tie. Are his outfits scholarly Oxford with an urban aesthetic? Or maybe street-style, highly refined?

I understand the five artists, but what’s the one love?

The one love is art, music, self-expression, culture. I’ve mentioned many things for the one. You fill in the blank, it all fits. I think primarily it’s the love of art and culture.

What was the idea behind 5 Artists 1 Love?

The whole point is to show that Edmonton is extremely diverse culturally and that, within the black community, there is a cultural mosaic that people need to know about. My experience as a black man from England raised by Caribbean parents in Canada is different from the guy who just landed and is an immigrant from Sudan. The common denominator is we have a certain degree of melanin in our skin and a similar narrative in some ways, but everyone is coming with these different stories and experiences, and I try to make sure that’s reflected in the show. The styles are all very different, and everyone that’s in the show has their own story. Perry Ellis suit; Next shirt; bow tie by Ben Sherman; pocket square by Tristan; lapel pin by Penguin; Ben Sherman watch

So for you personally, is painting your only artistic outlet?

My new form of self-expression is putting the 5 Artists exhibit together, particularly with producing and writing the music side. I’ll structure the show so there’s a theme. The first time we did the show, it was a story about how music left the continent of Africa and hit the shores of North America and how it evolved. So we started with African drums, then went to Negro spirituals then Mississippi Delta blues, into jazz, then it progressed into soul and R&B and a little bit of hip hop and, by the time we were done, it was like you had a lesson. In a way, this show is like painting, but instead of colour, my palette is talented locals. I choose artists who live here. There have been some who have moved away, but they consider Edmonton home.

Is there any similarity you can see between your art and the way you dress?

There’s colour. I love colour. But I’m not a peacock; I don’t want to stand out and be front and centre.

But the second you have a sense of style, you do stand out.

Yes, but you don’t want to be a clown. There’s a point where people cross the line and you can tell, “That cat’s trying really hard.”

Well, ultimately, to thine own self be true. You can still carry this air of style with you without appearing inaccessible or arrogant or contrived.

Where does your interest in clothing come from?

From England and the Caribbean. When we came to Canada, my poor mom was just beside herself because these people were showing up at church in jeans and T-shirts. That doesn’t happen in the West Indies. You put a little thought and you take pride in whatever you’re putting together for the event, be that church, tea with the Queen, or you’re going to go watch some ball at the stadium. Perry Ellis suit; Next shirt; bow tie by Ben Sherman; pocket square by Tristan; lapel pin by Penguin; Ben Sherman watch

How do you describe your personal style?

It’s somewhat eclectic based on the event. I do head-nods to fashion-forward genres. I read a lot of fashion magazines, and I’m aware of what the trends are. When I was younger, I was in deep; whatever was going on at the time, I had to have that gear. But I think as you mature, you can’t define yourself by trends because they’re going to change next year.

So trend is something you’re aware of but don’t follow religiously.

Being trendy doesn’t take thought. You can buy those outfits out of a magazine and put them together, but that’s not you. That’s somebody else’s notion of what looks good at the time. However, I do think it’s important that you have the classics, the basics. Then you include little head-nods to whatever’s going on in current trends, should you like it.

What’s something that’s personal to your style?

For the last eight years, I’ve been doing self-tying bow ties because no one else was doing it. I’m bringing a piece to the table that I actually enjoy and there’s a little bit of a novelty to it because not everyone can tie their own tie. And there’s a splash of colour that works with what I’m wearing. People who know me, they associate me with the bow tie. I like to think the patterns I’ve chosen are a little different, and I liked it better when people weren’t wearing them.

Do you have any particular fashion principles?

I’m not down with multiple prints. I like to anchor my outfit with at least one solid colour. For example, a pinstripe suit with a patterned shirt with a patterned tie with a patterned pocket square is too much. I like a bold print, particularly if people aren’t doing a lot of it. But I don’t like layering on too many different patterns, which has been a recent trend. Also, some people think that fashion is about money. I think you can get some outstanding pieces from a thrift shop, pieces that you put together with something that you did spend money on and you have this awesome outfit. I know people who have a lot of money and, left to their own devices, they couldn’t dress themselves. “Costly thy habit as thy purse can buy.” Spend what you can. It doesn’t have to be an obscene amount of money.

What’s some of your best fashion advice?

Dress in a manner that celebrates your uniqueness without being a clown or a spectacle. It’s about balance. I don’t think it’s good to have the room stop and turn when you walk in – I think that’s good in the movies, but I think what you want is a slow burn. I want the second look and the quiet nod like, “I understand you. I know what you’re trying to do, and you did it well, sir. Well played.” And dress for your body type.

Do you dress differently based on your weight?

Weight is a big deal. There are people who will follow the trend, in spite of whether or not it works for them. Like this nonsense with skinny jeans: You will never see this brother in skinny jeans. I acknowledge that at some point that was a trend and, thank God, it started to disappear, but that’s not one of those trends where I feel the need to own a pair of skinny jeans. For me to do that would be contrived – it doesn’t work for my body, or really even my personality. And, unfortunately, a lot of fashion trends are for the malnourished. But I’ve transcended that. I am not pouring myself into something that is made for someone three sizes smaller than me. It doesn’t look good, it doesn’t feel good, and it’s an example of somebody trying too hard.

I know a lot of artists who talk about their art like you talk about clothes.

It is art. Like, say if you were painting, you put a blue and a yellow and a red together in a certain manner, now you have a painting. Those colours were in existence before, but what you did with them will dictate what the end result will be. Clothes are the same way. These things are in existence; these shirts and trousers and shoes, these “colours,” they’re already in existence, but what do you do with them, how do you put them together? That’s what makes fashion art. Jones New York jacket; Attitude pants; Le Chateau bow tie; Tristan pocket square; Michelsons lapel pin

Piece of Advice: “To thine own self be true”…or “Don’t fake the funk!” 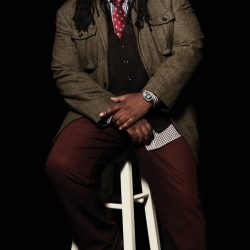 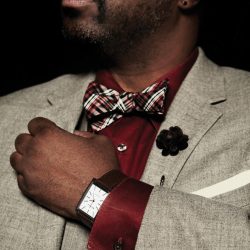 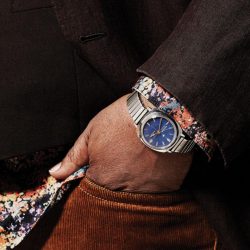 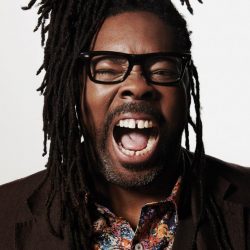