An odd space is transformed to accommodate design — and a designer
By Carissa Halton | January 1, 2015 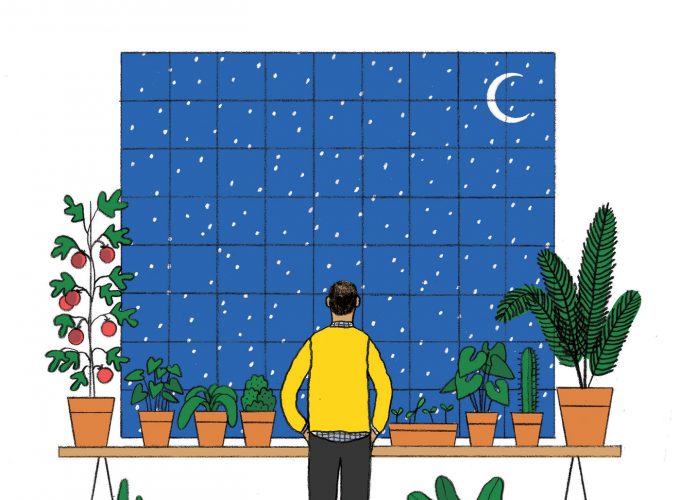 Style Gardens of Winter There’s plenty for a green thumb to do in the dead of the coldest season. Read More 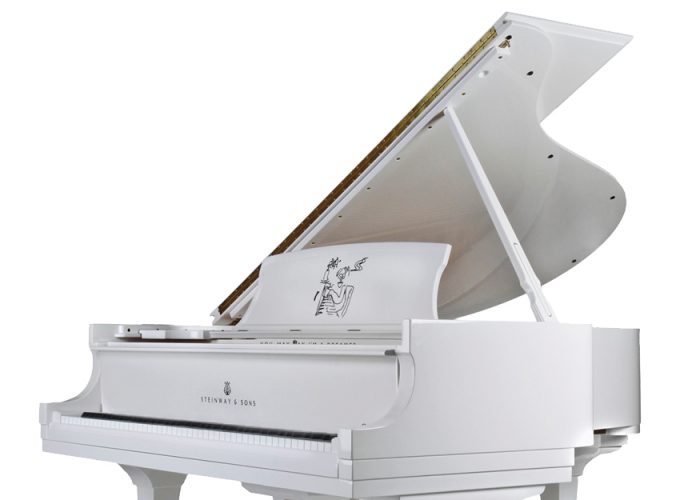 Style The Sky is the Limit Holiday Guide When money is no object, or you really need to impress the in-laws. Read More 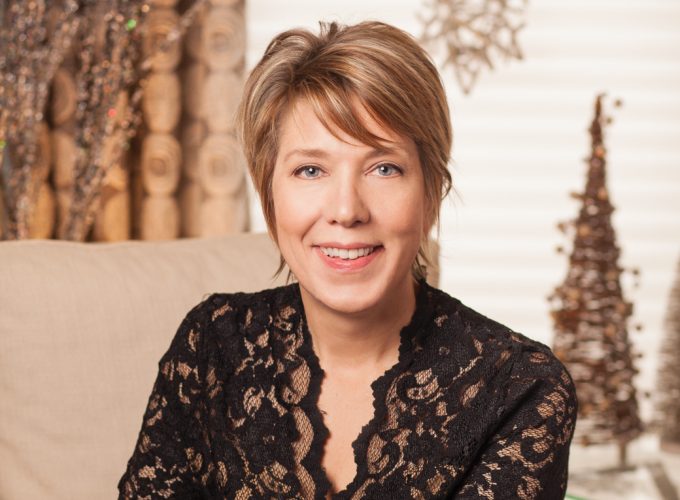 The hanging light fixture above Iwona Faferek’s dining table is non-linear and textured. It’s looks like an upside-down, skeleton nest in papier mâché; its texture and asymmetry reminiscent of Gaudi.

In fact, it’s a creation by Faferek, an industrial-design grad and now graphic designer at the University of Alberta’s City-Region Studies Centre. The fixture’s genius grew from the aftermath of a shattered broken arm. On a ski hill during the Christmas break, she fell and the break required meds, surgery and plaster (in that order). Gauze then plaster. Plaster on gauze. As she watched her cast being formed, the design opportunities seemed endless. When it came time to complete a design assignment with an immobile arm, the process came back to her.

Plaster on gauze. Gauze then plaster. She formed a dome frame of birch wood rods, then wrapped and pasted them with casting.

As with most of her design school assign-ments, the fixture is a feature in her Whyte Avenue condo that she purchased in the summer of 2013. She’d house hunted for the better part of a year before finding this place that, on paper, “seemed weird.” It is 1,200 square feet spread over three floors. There are three bathrooms (one on each floor) and — here was what seemed odd — only one bedroom.

On a day when she felt there was nothing
to lose, she viewed the row-house suite. It presented many different spaces, each of which lended itself to specific purposes; the main floor for cooking and dining, the second floor for relaxing and third floor for sleeping. She bought it and her first task was to paint the walls as white as blank canvases. She then covered said canvases. Knotty pine paneling — usually sold for the purpose of vertical wainscoting — adds texture to two different walls. She positioned the paneling horizontally and left it unvarnished for a rootsy cabin feel that acts as visual counter-point to the Scandinavian aesthetic.

Colour and further texture has been added on the second and third floor stairwells. She found the graphic wallpaper online, and the Scandinavian Design Center shipped to Canada. Its strong linear pattern made for some tricky installation in a space so narrow and tall. While she has a strong DIY instinct, when she set out to apply the wallpaper she realized that this was a job for a professional. “He told me it was a good thing that the condo [built in 2005] is so plumb,” she says. The bold pattern, columns of diamonds and triangles, draws the eye then the body up the stairs.

“There are a lot of great designers in Edmonton,” says Faferek as she climbs to her second floor space. It is part office, part cozy retreat whose walls are adorned with many of local designer’s graphic art. The small-run silk-screened prints capture your attention with colour, and draw you closer to reward you with unique details. Two red foxes dressed in green school uniforms dance on a spouting whale. A dozen stamped paper hats float against a sea of white. A detailed portrait of a red fox against mint green, screened foliage.

On the sideboard behind her work desk — a stained plywood board on top of a pair of sawhorses — are framed band posters. All have heavy graphic influences: Neko Case in block prints; She & Him ensconced in the body of a fishing vessel that sprouts the face of an emo teen; Superchunk in a mountain scene supervised by a giant eye.

In handy proximity to her workspace is a modern secretary desk. There’s no paper here, however. Open the front and Faferek has added under-mount lights that glint off bottles of gin, wine and homemade, canned sour cherries. Crystal glasses await happy hour spent on the sectional couch (one that contains decades-old memories of her childhood forts), lit by a teak lamp (also from her parents).

Past a small deck, following the graphic wallpaper to the third floor, Faferek does not need to point out the framed “The Songs of SNFU: An Illustrated History” poster by Nigel Hood at the top of the stairs. Hood’s iconogra-phy is animated and fun. It looks family-friendly until one moves in close…

Her bedroom is an open loft space rooted by a teak bed with modern lines and built-in side tables. Above it, a plate shelf holds a row of record jackets: there’s Kurt Vile’s Smoke Ring for My Halo and M. Ward in silhouette on his solo record, A Wasteland Companion. Her record player is tucked to the side and speakers are the utilitarian legs to a thick, pine board-cum-bench. It looks out through a glass door onto a second deck where skeletons of raspberry and blueberry bushes rustle.

Faferek is clearly a creative, however, she entered design school less for the aesthetic challenge and more for its utility. “I like design for the fact that you can use it to solve problems,” she says surrounded by a space that’s smart, beautiful and economical.

“I was part of the Student Design As-sociation and for a fundraiser one year, we made lamps. We drilled a quarter-inch hole through a block of walnut, and finished the block with polyurethane.” Faferek added a Marconi vintage bulb for a warm glow that’s easy on the eyes.

“I took five seven-foot wooden dowels, painted the bottom foot in white, then tied them tightly together, three quarters of the way up with leather string.” Its simple design has never let her — or her guests’ coats — down.

Says Faferek: “I printed a bold typeface, basic Helvetica font, and overlaid it onto poster paper. After I traced within the boundar-ies of the letter forms with cotton thread, I removed the typeface.” An experiment exploring borders and boundaries, it also makes for a beautiful poster when framed and hung.

Iwona Faferek’s condo references her love of music. So, why not create a playlist based on the musicians featured in the space? Head to iTunes or Spotify to build the list — or, better yet, get the music on vinyl and enjoy it how it was meant to be heard.

Superchunk, “The Question is How Fast”

The North Carolina indie rockers enjoyed their glory days in the 1990s, and the band’s On the Mouth album was one of the group’s high points. Singer Mac McCaughan’s voice nearly cracks over a flourish of guitars that build from the intro into the verse.

SNFU, “Reality is a Ride on the Bus”

Maybe the greatest punk band to ever come from Edmonton. SNFU was originally named Live Sex Shows, a band that played house parties in the city, before going on to become one of Canada’s best know punk acts.

Acoustic guitar leads into a song that, when you hear it, you don’t think is catchy at all. Then you’ll catch yourself humming it all day long. Damn you, Kurt Vile.

The American songstress is often mistaken for being Canadian, because she went
to school in Vancouver and was part of the great Canadian pop group, the New Pornographers. But this track captures her Americana voice, like a haunting country crooner from the 1950s.

Zooey Deschanel often plays the girl-next-door type in the movies and television. OK, the sorta weird girl next door. But she also shows off her chops as one half of She & Him, and this track is like listening to a Broadway showtune — with a country music twang. 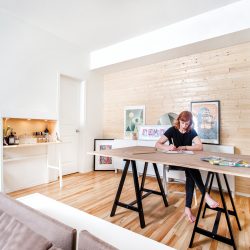 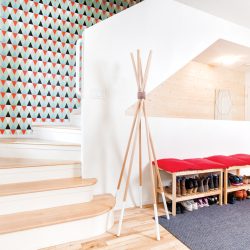 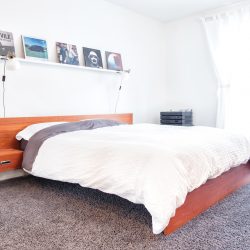 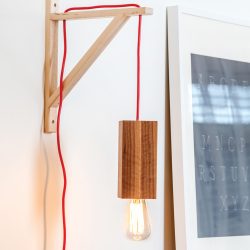 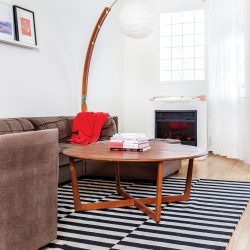 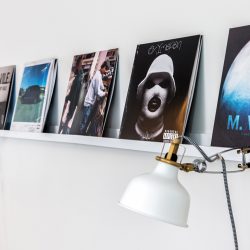 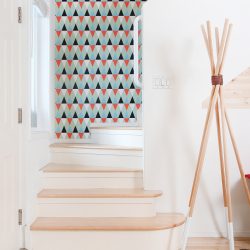 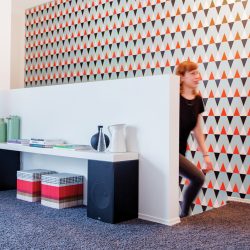 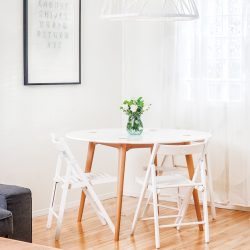