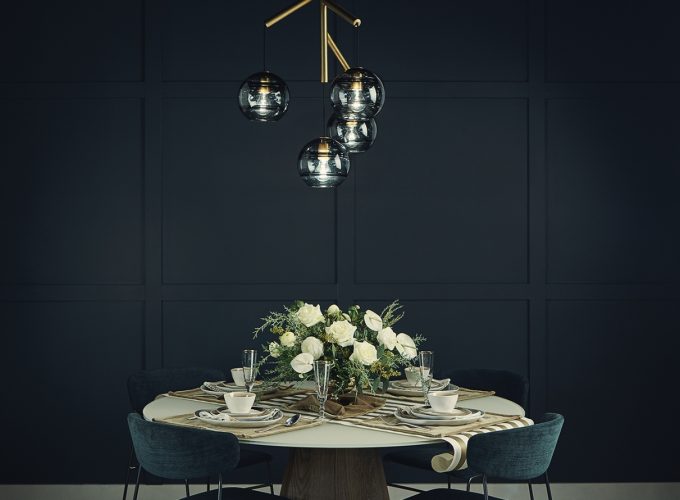 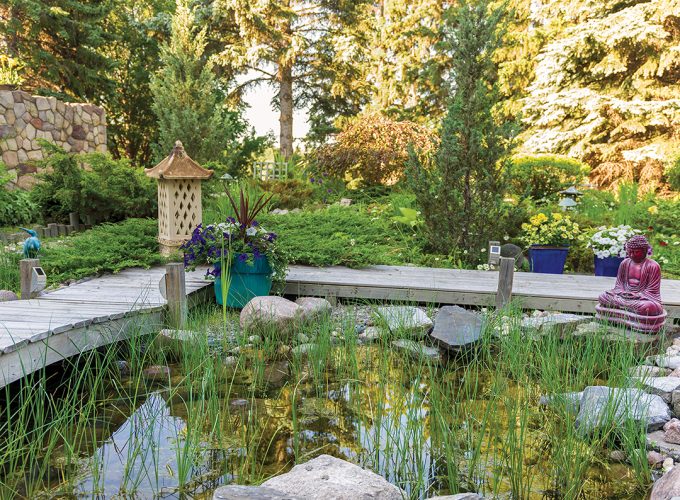 Mecca Fayad sits across her large marble dining table, sipping a glass of mint and cucumber water. Large gold earrings are reminiscent of the gold accents spun throughout her home in the chair legs and light fixtures. Her bold red lipstick stands out against a black blouse, just as royal blue barrel chairs are the focal point of an otherwise neutral living room. It’s a testament to how carefully curated each item in her home is, thoroughly reflecting her personality.

After living in a downtown condo, Fayad knew she was ready for something with a bit more space. She spent over a year searching for the right home in North Glenora and the west end before purchasing a 1,031 square-foot bungalow in the former. “I saw pictures of it online but I said no because, at the time, I didn’t want to renovate,” she says. “After seeing it in person, my dad made me realize that if I renovated it, I could make it my own. And buying a lower priced house, and then renovating it, was still cheaper than buying an already renovated house in this area.”

For more than four months, Fayad constantly supervised the renovations, all while working her nine-to-five job as a chiropractor. On a tight budget, she saved money wherever she could. Before work, she ran errands for her contractor, RML Construction, often getting to Home Depot as it opened at 7 a.m. On the weekends, she would compare furniture prices across the city and do smaller renovation jobs herself. Fayad explains how she tried to use leftover tile for the laundry room, only to realize there weren’t enough tiles for the entire room. She found herself, at midnight, pulling up all of the work she had already done only to re-tile it again the next day. But it paid off. What once was a chimney from the old furnace in the centre of the house is now an expansive kitchen island, opening up the space and featuring a grey hexagon backsplash. Polished white cupboards and a glass coffee table keep the room sleek, while double sliding doors off of the dining room bring in lots of natural light. “When I walk into this space, it’s a reminder of this big accomplishment,” she says. “Every time I come in here I’m like, ‘Is this actually mine?’ The entire process, I said I would never do this again and, now, a year later, I kind of want to do this all over again.”

Throughout the home, Fayad has brought in small details to liven up the otherwise neutral tones of the house. Golden chair and table legs catch the eye across the room, and pops of pink and navy warm up the otherwise cool, modern tone. Overhead, atom-shaped light fixtures pay homage to Fayad’s science degree while casting a glow over new hardwood and a Canadian made F2 couch – ergonomic, of course. The Pinterest-inspired theme is a stylish setting for the young doctor, but she made sure to invest in some timeless pieces.

“I didn’t want it to be entirely trendy,” she says. “I still wanted it to have classic elements, such as the hardwood floors or white cabinets. I tried to pick items that were easy to swap out in case I want to change the design in the future. Instead, I added my personality with the accessories.” Originally from Lac la Biche, Fayad says she’s a small-town girl at heart and made sure to bring some natural elements into her centrally located home. The corner lot was entirely resodded (with plenty of help from her father) and a pine tree removed to make way for a new perennial garden. Inside, generous bouquets of gladiolas sit on nearly every surface, a perk she gets from the floral shop, Fabloomosity, in return for chiropractic services.

The new and improved bathroom features a large LED mirror that offers ambient lighting for getting ready in the morning. Fresh eucalyptus leaves hang against herringbone shower tiles, acting as natural essential oils when they react with steam. Around the corner in her home office, a large gold-trimmed desk often gets pushed out of the way to accommodate a chiropractic table for at-home adjustments. Atop a bohemian-style pink rug sit half a dozen HomeSense bags filled with brightly coloured napkins and party favours for an upcoming party. As important as the home’s design was, equal weight was given to its functionality. In her spare time, Fayad runs a budding Instagram page, so creating a space that would provide her with an Insta-worthy backdrop was a definite plus. And having a space to entertain was non-negotiable. The entertainment unit in the living room has adjustable length so it can be used to display snacks and drinks for large gatherings and an outside seating area extends the living space for warm summer nights. Whether it’s hosting her large, tight-knit family or throwing a catered party for her clients, her home is always open to company. “I don’t feel like a house is a home without people in it. What’s the point of putting money and time into this beautiful space if no one can share it with you?”

This article appears in the December 2018 issue of Avenue Edmonton. 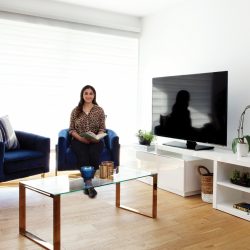 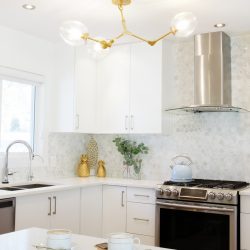 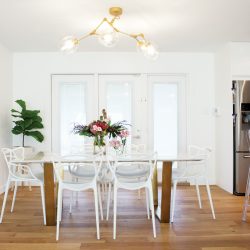 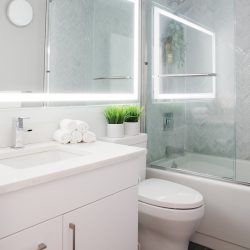 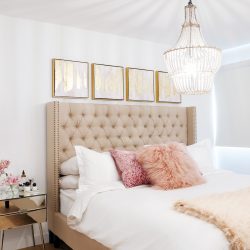