How To: Adapt To Being a Downtown Pedestrian

There are better solutions than wrapping yourself in reflective tape.
By Cory Haller | December 29, 2016 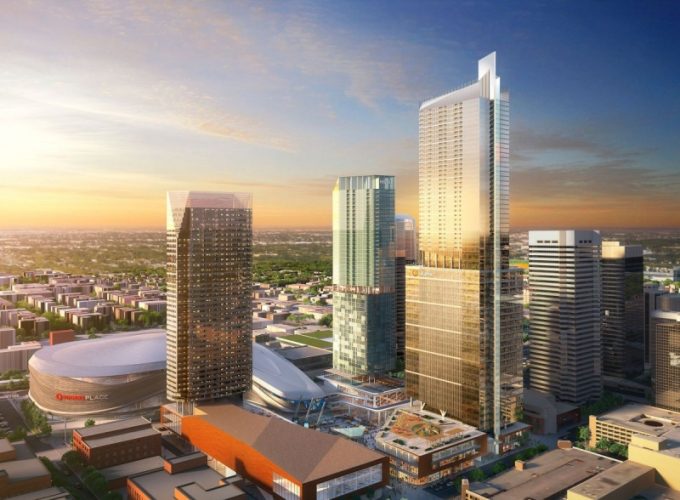 With Rogers Place open and hosting Oilers games, numerous concerts and events, downtown is more crowded than ever – with little available parking spaces to meet the demand. Now, more than ever, Edmontonians are finding themselves manoeuvring through the core on foot, which, for the uninitiated, can seem daunting. So here’s everything thing you need to know to be a pedestrian in the core.

Transit is your friend

Sure, there are 18,000 parking stalls within reach of the arena, but on any given event night, arena managment expects at least 6,000 spaces to be consumed by attendees. Add to that the influx of drivers (often out-of-towners) coming to shop, eat and experience the newly rejuvenated nightlife of the core, and parking is no longer a guarantee.

But you don’t need those spaces, do you? You’re an Edmontonian in the know. While the tourists are gas guzzling into downtown, you have other options.

This isn’t England. In Edmonton, the trains here generally run on time. Not only does that help you schedule your foray into downtown, but also the eight Park & Ride locations at every corner of the city (four of which are connected to the LRT) ensure that parking is always available. Collectively, the Park & Ride lots hold 3,628 free stalls and 1,627 paid stalls.

And, once you’re in the core, you don’t have to waste time driving in circles through construction zones and heavy traffic just to find a space.

A word of warning

To the naked eye, it looks like, somewhere along the line, city planners didn’t take into account the massive arena being built right beside the new MacEwan LRT Station on the Metro Line. It’s not nearly the size of the platform at say, the Coliseum LRT Station. It’s obviously too small to accommodate the traffic from an arena event and even ETS urges riders to use the Capital Line to avoid a bottlenecked crowd. But avoiding the station should be fairly easy with Churchill and Central Stations being only a few blocks away.

On average, there are six pedestrian/vehicle collisions in Edmonton per week, so with more pedestrians on the streets of downtown, everyone needs to be mindful of each other.

What you could do

In September of last year, the city’s Heads Up traffic safety campaign fell under scrutiny for an ad that put the onus for safety on pedestrians by recommending they carry flashlights and wear reflective tape. Though the ad was not used, the recommendation is still featured on the City of Edmonton website. Luckily, Avenue has compiled some tips for how to get the fresh, reflective look:

1. Go to Home Depot, Home Hardware, or any other supply store in your area, and purchase a few rolls of reflective tape. They generally run from $8-$40 per roll.

2. Dress in your very best for a night on the town.

3. Undo all that work you just put in to your attire by wrapping every inch of your body in reflective tape.

4. Pull out a flashlight from your garage and head out the door.

What you should do:

Tape-wearing mess aside, it doesn’t hurt to pay more attention. Sixty-six per cent of our city’s pedestrian collisions happen at intersections and marked crosswalks. In fact, out of the 1,545 pedestrian collisions from 2011-2015, 82 per cent of investigations found the driver to be at fault. So you can take some common sense steps to improve visibility and alertness.

1. Ensure you are crossing with the right of way

2. Hold an arm out while crossing the street to indicate your intent to cross.

What you shouldn’t do:

This may come as a no-brainer. Edmonton isn’t Ottawa or Toronto where it seems everyone crosses anywhere at anytime. Since Edmonton is such a car-heavy town, being a safe pedestrian in YEG means following the rules.

Hit the Restaurants and Shops

Walking around downtown is no fun if you have nowhere to walk to.

The 104 Street Promenade is filled with restaurants such as Mercer Tavern, Baiju, Black Pearl, Tzin and Rostizado, while Corso 32, Bar Bricco and The Needle Vinyl Tavern are just a short jaunt away on Jasper Avenue.

Shop for sweet treats at Jacek or pull the latest trends from the numerous stores in Manulife Place or Edmonton City Centre.

Relax where the people are

Downtown isn’t exactly filled with park space, but Sir Winston Churchill Square is buzzing with activity for children and adults alike. If you’re looking for a quiet space to read or people watch, head to Beaver Hills House Park.