Edmonton Public Library's Writer in Residence is wearing one dress throughout 2015.
By Adrianna Szenthe | September 12, 2015 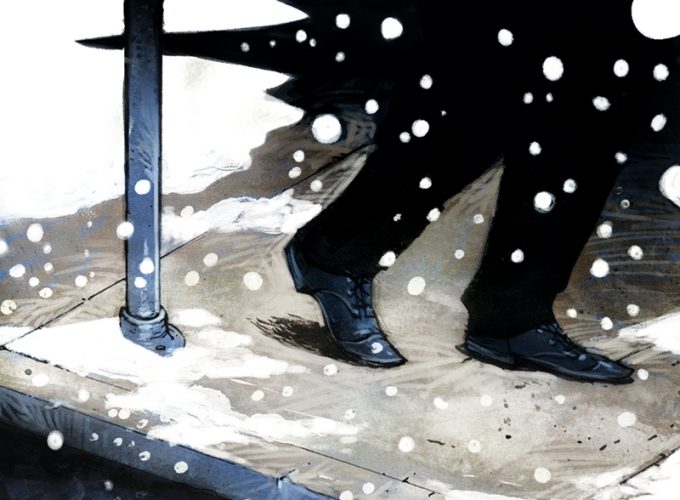 When you meet Elizabeth Withey – who is currently serving as the Edmonton Public Library’s Writer in Residence – in 2015, you’ll also meet “Laverne,” a simple black dress from local boutique Workhall that Withey is wearing day in and day out as part of a personal project.

Her project, Frock Around the Clock, was born of a desire to simplify at least one aspect of her life. “I felt like I was wasting a lot of time staring into the closet trying to decide what to wear instead of helping my son out with whatever he needed or just spending my thinking time more productively,” Withey says. She decided to challenge herself to wear the same piece of clothing for 365 days straight. Now, as she enters the ninth month, she isn’t regretting the decision at all.

“I do think there’s something to be said for the idea of the uniform,” Withey says.

Throughout her time with Laverne, countless individuals confessed to her that they were buying the same types of pieces over and over again. “Why not just embrace it?” she says.

Withey’s project joins a list of similar sartorial challenges – it seems that, for every fashionista scooping up the season’s hottest pieces, there’s someone looking to pare down her wardrobe. In 2010, Kendi Skeen, the style blogger behind Kendi Everyday, created her 30 for 30 Remix Challenge, in which she would select 30 items from her closet and mix and match them over the course of 30 days. Matilda Kahl, a New York City art director, received a lot of attention in April 2015 thanks to an essay she wrote explaining her work wardrobe – a uniform of a white silk shirt, black trousers, and leather rosette. Her unconventional style choices even sparked Dress Like Matilda Day at her workplace, Saatchi & Saatchi.

“I just think it depends on what your creative self enjoys most,” says Withey. She acknowledges that a pared-down wardrobe wouldn’t work for someone who expresses their creativity through their style, but for her, it was a huge relief. “You don’t [miss the options] . If you pick something that’s really versatile, and you pick things that you’re comfortable in and that will last, I don’t think you’ll miss the other stuff.”

As for Laverne, Withey still isn’t sure what she’ll do to mark their year together. “If anybody has suggestions, I’m open,” she says.