This restaurant trend is bringing Edmontonians closer together.
By Ramona Korpan | February 11, 2010 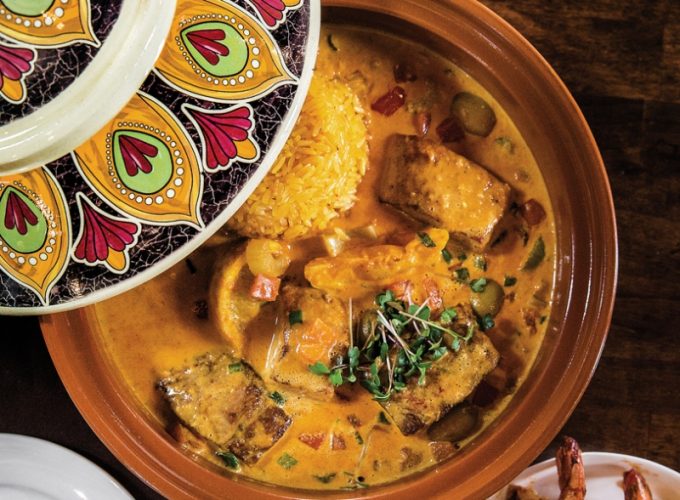 Restaurants across Edmonton and beyond have come to think of family-style dining as more than what’s on a family dinner table. Instead they think of it as a style of eating out where groups of guests serve themselves from large, shared platters, rather than ordering individual meals.

Such a setup might bring to mind a traditional family meal, but the concept has exploded among corporate groups and social gatherings. “We definitely thought about family-style sharing for families or Sunday dinner type things,” says Saylish Haas, owner of Meat. “But we didn’t realize how many people would be coming for birthday parties and that kind of thing, which has been really interesting.”

According to Sabor Divino chef Adelino Oliveira, date night is also a popular occasion for shared platters. “Young couples that go out together, they’ll come here with almost the intention of [sharing platters] ,” he says. “You’ll see two couples, three couples sit around and all share.”

So what is it that’s drawing these groups of acquaintances to sit as faux families and share food in such an intimate way? According to Cafe Amore co-owner Cristo Crudo, it’s about creating a connection. “It just allows for more unity at a table,” he says. “Everyone’s having the same items, which allows them to discuss things before passing the platter around. Conversation opens up which then allows a nice warm feeling, a warm vibe.”

Oliveira has noticed a similar pattern among his customers. “They talk about food a lot more because they all get a chance to taste it,” he says. “Whereas if you have four people all eating something different, it goes as far as ‘how was yours’ and ‘how was yours,’ and that’s about it.”

For many restaurants, the decision to offer the option of family-style service is rooted in cultural tradition. Crudo explains that even though many restaurants are now picking up on family-style dining as a trend, it’s nothing new, “especially with Italian families. We’ve been doing that forever.”

“I had just arrived from Portugal about a year before we opened,” says Oliveira. “Dining there is still a lot of family-style. Courses keep coming to the table in platter fashion.” This style of dining isn’t limited to European families either, according to Oliveira. “If you look at Indian cooking, Chinese cooking, all kinds of Asian cultures, do eat in that fashion,” he says. “We get a lot of these families coming in here, and they will order a bunch of dishes and ask for them to all come at once to the middle of the table and just share them.”

The appeal of family-style dining, however, is quickly extending beyond cultural experience. Proof of its widespread popularity is Meat, which specializes in barbecued fare, sold on platters by the pound. Haas was simply motivated by the social potential. “The atmosphere of the restaurant just has way more liveliness,” she says. “It feels exciting in there when you come in.”

The 2021 municipal election takes place this coming fall.
33% City needs to hold the line on taxes
50% Am willing to pay more in order to increase/maintain services
17% Want my taxes reduced, even if means cuts to services/city staff
0% No opinion/this issue is not important to me
Current results