Who’s at The Helm?

The newly unveiled window display of The Helm on 104 street, an upscale menswear store that aims to target a young demographic, features a stylish group of mannequins wearing a mix of Italian sweaters, jackets and scarves – the kind of things James Bond might wear on a day off in Venice.

My first response upon entering the store was: “I want to buy all this stuff.” But the least flashy of those mannequins would have to shell out nearly two grand to take his outfit home.

Co-owners Chad Helm and Brad Kahler sit down to talk shop, divulging their philosophy and whether the city’s ready for it.

Avenue: Things are clearly a little different here. It feels like you went to Milan and New York so that we wouldn’t have to.

BK: We did. It would have been silly to sell all the same products that can be found everywhere else. When a client comes in here they can be confident that their neighbours walking down the street aren’t going to be wearing the same thing. Plus, they’re going to look better.

Avenue: Maybe you get this a lot, but when I first walked in and looked around, my condition shifted pretty quickly from wanting to wishing.

CH: Someone posted a beautiful picture of our sign on Instagram with the caption “Helm: Latin for expensive clothing.” And we are expensive. But if you want a good suit made for you, it’s always been the price of an ounce of gold. We’re not shooting ridiculously high. We want everyone who wants something nice to come here.

Avenue: Your target market is clearly a younger, hipper urban crowd. Are they ready to pay $1600 for an overcoat?

BK: We’re a city growing into itself. Wealth is transferring to the next generation. That generation isn’t as self-conscious. They’re going out and spending money on good things.

CH: I’ve watched this whole notion that Edmonton’s not ready fly out the window. Completely. Our most expensive collection, Corneliani, is by far our best-selling.

BK: I don’t know how many times since we opened we’ve had somebody say “it’s nice to finally have a place like this.” It’s gratifying that people get it. They recognize it instantly. 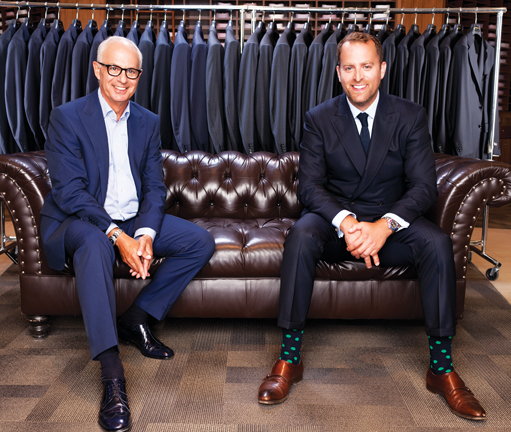