One space. Three designers. Dozens of cool decorating ideas you can take away.
By Tina Faiz, Caroline Barlott | February 11, 2010

The idea behind this friendly competition: To tackle 125 square feet of living space inside a Jasper Gates condo. All three looks are very different, but have one trait in common: Big on style in a small space. And who are the judges? That would be you, our readers.

Here’s your chance to see the designs and tell us which of the three designers’ work you like the best!

Is it Jacqueline Hoshizaki’s sophisticated-yet-playful design, which emphasizes splashes of colour? Is it Yamina Ortynski’s eclectic room, which mixes animal hide with modern elements – and lots of wood? Or does Lori Dundas’s modern-yet-sophisticated design, with the dominant curved sofa, look like your dream room?

Each of our three designers made the room her own. None of the designs are similar in any way. In fact, when we looked at the photographs, only the fireplace on the right served as a reminder that these were all images of the same room.

So, comparing the designs will be like comparing apples to oranges. But it doesn’t mean we won’t try, anyway.

Congratulations to Yamina Ortynski, who won the majority of votes with her design.

After 24 years in the design business – first as showroom assistant with ReidBuilt Homes, then as owner of her own design company – Hoshizaki still loves styling rooms. “It’s a rush to see something you create on paper come to life in front of you.”

Her extensive travels – she’s been to Japan, Egypt, Australia, Thailand and Europe – have inspired a love for many different styles of architecture. But the four years she spent living in Oak Park, Illinois, the home of well-known architect Frank Lloyd Wright, was especially influential. “I loved being surrounded by all the beautiful, clean, simple homes,” she says.

Now, she splits her time between renovations and designing newly built, eco-friendly homes through her company, J. Hoshizaki Designs, and Habitat Studio & Workshop, a local builder she used for her own home.

Her style? “Modern. And a little retro,” she says. “And I love red. In most spaces, I try to have at least a small amount of red.”

For this space, Hoshizaki (with her design assistant Megan Martin) designed the living room around two custom pieces by Edmonton artists. First, the Maria Pace-Wynters painting above the fireplace, mostly because of the red corset. “It’s whimsical, and she always uses bold colours. That’s why I love her work,” says Hoshizaki. Second, Rose Marie Pally’s standing glass art pieces. The pair are made to look like trees, mimicking their knots and the texture of bark. To ground it all, Hoshizaki used three glass-and-oak drums as coffee tables, designed by Edmonton furniture makers, IZM.

“I hope the use of colour sets us apart,” says Hoshizaki. “We used a lot of colour … even though we weren’t allowed to paint or add a wall covering. We tried to be tasteful, and I hope that shows, and I hope it’s fun. I don’t take myself too seriously, and I think that’s what this space shows.”

When she was younger, Lori Dundas struggled with what she wanted to do with her life. She was drawn towards interior design, but it “felt a little frivolous.” So when she took an introductory design class to learn how to style her own house, she didn’t expect it to influence her career choice. But a lecture by architect Ron Wickman made her see the depth behind design. Wickman spoke of barrier-free designs for people with mobility issues, that design can give people dignity.

Dundas went on to earn an Interior Design degree from Calgary’s Mount Royal University. She especially became interested in environmental psychology: How people react to spaces. “Hotels are very experience-driven,” she says. “When people walk in, they get hit with sights, smells, a feel. You can control howpeople feel.”

Dundas struck out on her own five years ago, mostly designing for resorts, hotels and restaurants in Calgary, Victoria and the Okanagan. In the last eight months, she designed six restaurants for hotels, and is currently working on a new Aloft hotel in Calgary, opening this summer.

For the contest space, Dundas wanted to make an impact. “I focused on … pieces you’ll cherish, heirloom pieces you’ll want to put in your will,” says Dundas. “Everyone will want that rug,” she says, because the wool and silk Zo Luyendijk rug looks different from every vantage point. “You’ll never get tired of looking at it.”

What is great design to Dundas? “I like poetry in design – a conversation that’s happening between the pieces. The pieces pull you in. The high-back chair has a sexy feminine form to it, leads you to the low back sofa and your eye moves into the fireplace – the architectural element in the room – and on to the masculine chair. They play back and forth. It’s effortless elegance.”

Interior designer Yamina Ortynski doesn’t just know how to style an interior, she knows how to build one. While studying fine arts with a major in music at the University of Alberta, Ortynski developed an interest in construction. By age 19, she had built her first home and 10 more by the age of 23. Later, she worked for Medican Construction as a project manager.

When she bought her own downtown condo, in 2005, she decided to submit photos of the newly decorated space to Home and Garden Television (HGTV). It was chosen as one of the top 10 in Canada and she went on to be a finalist in the Designer Superstar Challenge for HGTV. Shortly after, she developed her own company, Y Design.

But it’s not just her knowledge of construction that comes in handy now- her background in music also helps.”I was a bass player. The bass is what gives you the rhythm and grounding,” she says. “And when I’m designing, I always ask: What is the thing that grounds this space?”

In the case of the Jasper Gates space, it was the fireplace. “I looked at the bones of the room, and decided what pieces would fit best,” she says. The space gave off a rustic vibe, and while she wanted to complement that, she also wanted to contrast it. She used earthy tones like the moss green found in the chaise, and mixed rustic objects with modern items. Ortynski worked with Panache Ceramics and Glass to create a glass piece of art that’s wavy design mirrors the undulating shape of the chaise. “The styles coexist – they remind you of times past, but maintain their modernity,” says Ortynski. 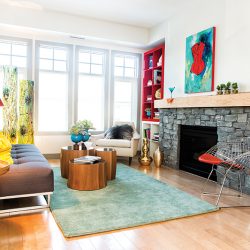 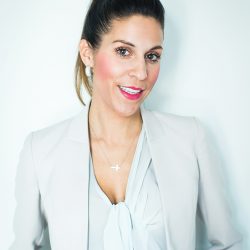 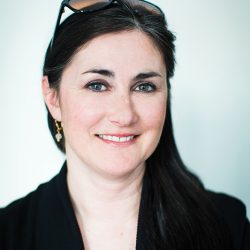 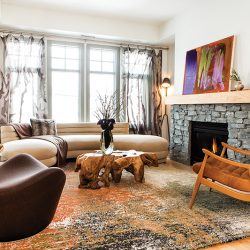 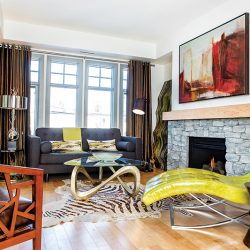