Connor McDavid’s house has everything you would imagine — except hockey memorabilia.
By Caroline Gault | July 10, 2020 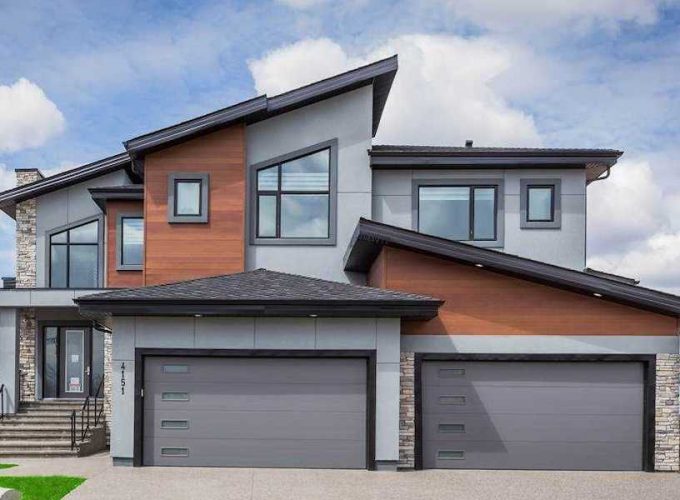 Style Property of the Week: Look Up — Way Up This spacious home has windows and fireplaces to spare. Read More 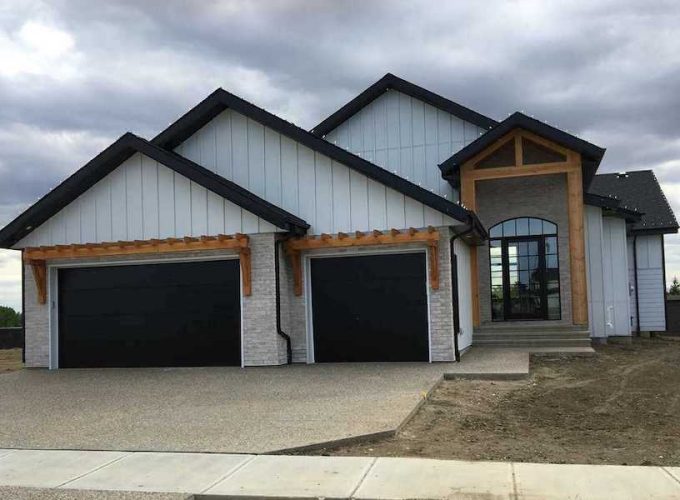 Style Property of the Week: Like Winning the Lottery This former Big Brothers Big Sisters lottery home is a custom-made dream. Read More 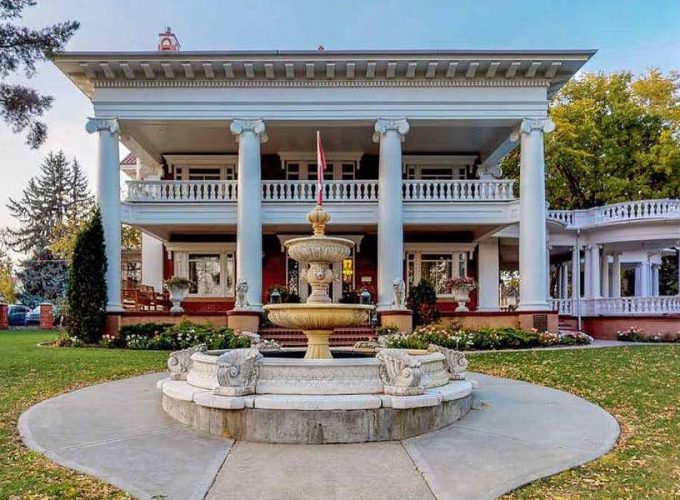 Style Property of the Week: Magrath Mansion Own an historic piece of Edmonton history. Read More

CONFESSION: I’ve never been to an Oilers game, but I’ve somehow made it inside Connor McDavid’s house. As an Edmontonian, I don’t know if that makes me ridiculously lucky, extremely smart, or a complete asshole (or all three), but it certainly makes me an anomaly. Thankfully, inside the modern sleek, black- and wood-accented exterior there’s not a hockey reference in sight, so I won’t have to fake it. As 23-year old interior designer Lauren Kyle — McDavid’s longtime girlfriend — welcomes me into the 8,000-square-foot mansion she designed, she’s rightly amused by my suggestion that hockey royalty must have hockey regalia adorning the walls. “Connor doesn’t like showing off hockey memorabilia,” she says.

Advertisement
What the interior does have, however, is a fitting sense of youth and grandeur: A plush, grey sectional sofa by Timothy Oulton large enough to host an entire team anchors the living room; a glass wine-bar wall in the basement is stocked with hundreds of bottles; a Hollywood-style his-and-her dream closet (we’ll get to that later) lives upstairs; an indoor sports court (McDavid’s dream) is one of the most-used spaces in the house; and a very chic — yes, chic — elevator leads to a top-floor, heated balcony with its own hot tub, swing and unfettered views of Edmonton’s river valley. It’s a dream home for a young couple with nothing but possibilities ahead. During the 18-month build, Kyle had free reign to bring the house to life — save for a few key requests from her boyfriend (like that sports court). When asked to describe the interior in three words, Kyle says, “Tactile. Intimate. Hub.” The striking space is designed to entertain guests, bordered with black-and-white ceilings and walls, textured backdrops and Italian Calacutta marble.

“ [The Calacutta] was kind of the driving force to the design concept and material palette,” Kyle tells me, noting how the gold marble veins influenced many of her accent and furnishing choices, like the brass and suede Henge dining room chairs.

The focal point of the open-concept kitchen is a sculptural-looking island made of Calacutta Porcelain from Edmonton’s Western Marble Craft. In all its glory, it appears to be a solid mass flowing from one surface to the next. It’s a means of “grounding and balancing the space,” she says, and is an extra four inches taller than most countertops. “It’s like you are entertaining behind a bar, [but] it’s still functional for cooking and eating on.” “I love cooking just about everything,” she adds. “Indian, Italian, Greek, you name it.”

The perimeter of the kitchen is almost entirely concealed with simple black panels. Two Miele dishwashers are knock-to-open, a unique, functional feature that avoids fingerprints.

As we walk across the kitchen’s light, Herringbone wood-looking tile floors, the couples’ dog, Lenard — a miniature Bernedoodle with his own Instagram following of over 12,000 (@lenardthe- bernedoodle) — jumps playfully at our feet. Lenard is clearly the man of the house; his portrait takes centre stage on a custom bar that’s encased by floor-to-ceiling metal sliding doors, which were handcrafted by Edmonton’s Forge 53. The industrial-style furnishing company also custom made the large-scale television panels above the fireplace, almost shrine- like when the TV is on (I assume that’s when the hockey games really shine). “I did the initial drawings, showed them the concept, and explained how we wanted this system to work,” Kyle says of the paneling. “And then they brought my vision to life. [Forge 53] was unbelievable.”

Using Edmonton-based businesses was important to Kyle, a Sudbury, Ontario native who studied interior design and architecture at Ryerson University in Toronto. She moved to Alberta in 2019 after three years travelling back and forth every other weekend. Over that period, she also launched her own interior design studio, coined Kyle & Co., and worked closely with local firm Design Two Group Inc. to build the Edmonton house from scratch. “I loved the process because I’m involved in it [through my work] , but I think it’s definitely more difficult than people think. There’s so much that goes into it and so many details. It’s long, it sometimes can be frustrating. It’s an interesting process.” One process Kyle certainly had fun with was outfitting the basement of the house. At the top and bottom of the dark, tiled staircase, urban paintings with bright splashes of colour by a New York artist named Flore hang on the walls. Downstairs, there are three large-scale Ralph Ueltzhoeffer portraits of Andy Warhol, Jimi Hendrix and Jack Nicholson, each composed of thousands of tiny words. The iconic faces gaze upon a cozy lounge and a frosted glass orb Apparatus Studio chandelier that dangles over the pool table, setting a playful tone to an otherwise moody, masculine room. “I wanted it to feel like a speakeasy separated from the other rooms of the house in style, because it should have its own feel,” explains Kyle. “I find, generally, that basements are so boring, and no one utilizes them well.” Down here, Kyle scores top points for utilization. It’s where they play basketball and pickleball on that sports court (similar to the rest of the house, the sports court is also monochromatic), and they regularly hit the gym and steam shower. In the evenings, they watch movies in a theatre room that brings new meaning to the phrase, “staying in.” Equipped with custom sound paneling by Edmonton’s Eldrick Upholstery
+ Interiors, the room’s finishing touch is the black, movie theatre-style popcorn machine in the corner. While the house can comfortably host three additional couples, the basement suite is a hot commodity. “Usually people are fighting over this room,” Kyle jokes. Between the white wainscotting and a silver spiked Kelly Wearstler lighting fixture hanging over the bed — added “for visual comfort,” Kyle explains — the guest room nearly rivals the master. I said “nearly” in that last sentence, because Kyle’s favourite room in the house is the closet I mentioned earlier, adjacent to the upstairs master bedroom. She says the stylish, functional space was inspired by designer Yves Saint Laurent. A kind of shrine in its own right, the all-white wardrobes are illuminated by hidden overhead lighting and centre around a Nero Marquina black quartz island with T-bar knobs from London’s home-fashion label Buster + Punch. On the “his” side of this dazzling dressing room, McDavid’s slip-on and athletic shoes line many of the shelves, many of which are Adidas. For Kyle, pieces range from Zimmerman and Chanel to Zara and Anthropologie. “I find it so helpful to have a glass front to the closet […] then you see all your basics, your blouses and your coats. It’s just so much easier to pull it all together because you can actually visualize it.” Without a doubt, the girl’s got vision. When I exit the Edmonton house that Kyle and McDavid built, I don’t know if I’m more impressed, envious or inspired. But I certainly feel privileged. 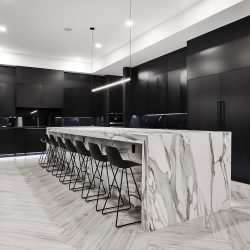 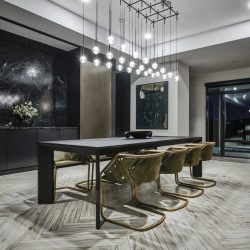 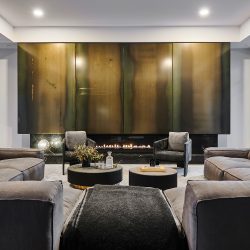 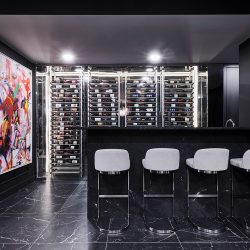 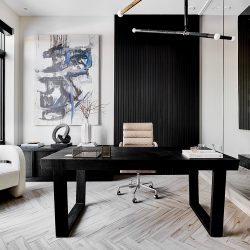 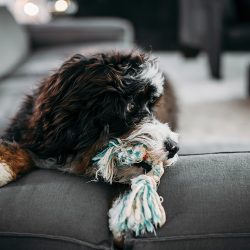 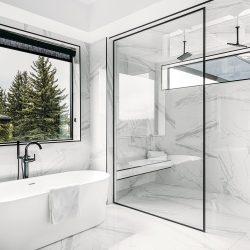 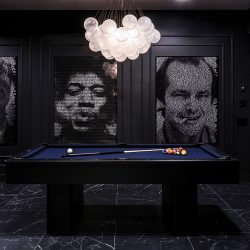 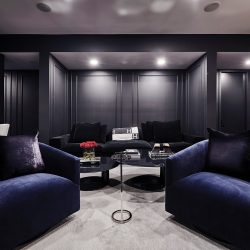 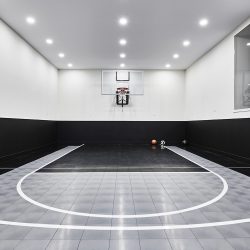 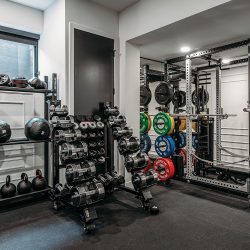 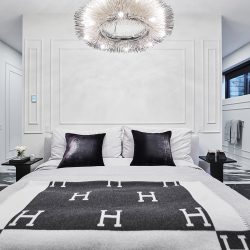 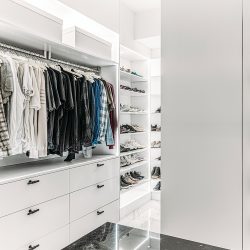 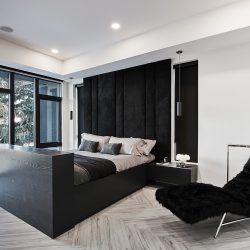 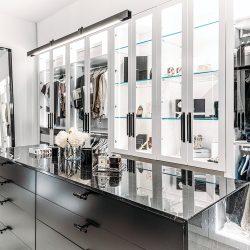 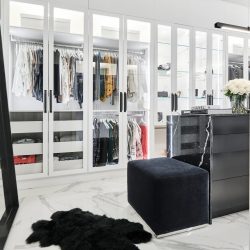