When you peer out the vast windows of this Crestwood home, the snow might look like white sand and the firs like palm trees.
By Jane Marshall | March 3, 2011 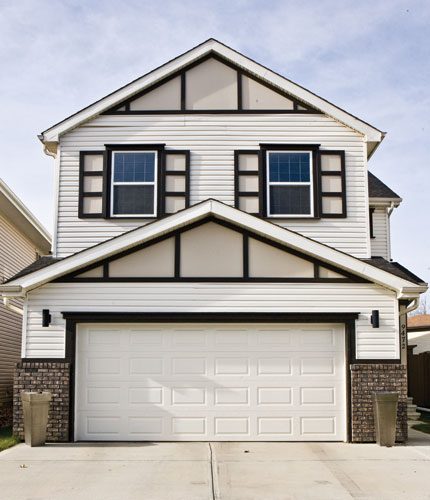 When it comes to building a house, it can be challenging to find the right designer, one who can integrate trends, expert opinion and, most importantly, the homeowners’ tastes. But for Larry and Lisa Jenkinson’s new two-storey house, all of those elements were built right into the package.

As a former interior designer who now runs her own design business, Ldesign, Lisa’s vision formed the essence of their home. Her husband, Larry, vice-president of Henry Singer Fashion Group, also understood that, when it came to building their home, looks were paramount. “When Lisa and I were dating, she said image and wardrobe are important in my career and that her home was her business card as a designer,” he says. (Since the home’s completion in 2007, Lisa has gained clients thanks to visitors enamoured with her crisp, clean style. “So I was right!” she jokes.)

With their combined skills, all the Jenkinsons needed was a builder and a lot to build on. They had lived previously in a 1913 house in the west-end neighbourhood of Crestwood and loved the proximity to MacKinnon Ravine. “We thought the perfect scenario would be to find a lot within a two-block radius [of the previous home] , but we thought it would never happen,” says Lisa.

“We found a lot we liked and got there as soon as the listing opened. But the realtor noted that there had already been an offer by a builder,” Larry recalls. “She found that many of the lots I’d looked at had been purchased by the same builder.”

The builder turned out to be Ackard Contractors, a homebuilding company that has constructed and renovated a number of homes in the area. Larry called them and said: “I’ve been chasing you all over the neighbourhood!”

Aquilino Naccarato, one of the partners of Ackard Contractors, was pleased to help Lisa and Larry realize their dream home. “There are so many details designed by Lisa that are beautiful features. The key difference between this house and others I’ve built is the amount of detail,” he says.

“Aquilino was always very open to the ideas I was throwing around,” Lisa says. “He never said, ‘no.’ Many things weren’t standard, but he made it work. I designed how the house would function and look, and Ackard built the shell.”

The guiding vision for the home was the creation of an “urban beach house” feeling.

“I have always loved the casual, relaxed feel of seaside homes you’d see in the Nantucket region,” says Lisa. “Even though I’ve never actually been there, I’ve always been drawn to this style in magazines or books. I wanted to achieve that feel, but not take the style too literally, as, of course, Edmonton is nowhere near the sea. Modern homes, especially when located in a city, also appeal to me because of their clean, sophisticated feel. So, I’d say our house is a result of a blend of both styles, hence ‘urban beach house.'”

The effect is achieved partly with warm white walls decorated with black and white visual art, picturesque window shutters, a sprawling veranda and a screened-in porch to the backyard.

When it came to finding matching decor, Lisa says, “I was looking for pieces that were casual and inviting, but still contemporary and, in some cases, had a bit of an industrial edge. They also needed to be durable and functional enough to suit our lifestyle as a family, which includes a child, a cat and a dog.” This influenced the material and choices, leading her to look for ultra-suede and leather seating, along with “soil-hiding”colours such as neutrals and beiges. “The neutral scheme is also fitting for the casual and contemporary feel,” she says.

But to really see the “urban beach house” theme in the home, one must look up. On the first storey, five truss beams angle to the ceiling peak. The vaulted ceiling runs from the living room at the front of the home through the dining room and across the kitchen at the back. A dormer window above the dining room allows natural light to softly illuminate the vast space throughout the day.

Lisa says it was important to have clear sight lines so they can supervise their nine-year-old son, Ethan, something that was hard to do in their previous house with its defined rooms. “But at the same time, we didn’t want it super modern and austere so that it became cold,” she says. Incorporating archways helped, she adds.

Larry’s favourite room is the kitchen – he calls it the “heart and soul.” It has an industrial feel, with honed granite (the polish is removed from the stone before installation) and a big, rectangular farm sink. “We entertain a lot, and the adjoining multipurpose room lets us watch the kids while guests drink wine at the bar stools or help to cook,” Larry says.

Lisa loves to juxtapose rough and old against modern, proven by showcasing a rough Indonesian wood bench against a wall in the living room. “I love throwing a bit of unpredictability into a space. The element of surprise is important to keep it interesting,” she says.

She used her background in commercial design to find items not usually spotted in homes, such as sliding glass barn doors between the kitchen and a multipurpose room where Ethan likes to spend time.

Upstairs, the master bedroom and ensuite are on the east wing and Ethan’s room and the guest room are on the south, divided by the staircase and a gallery wall. Natural light floods through the walkout balcony’s glass door into the master bedroom. Beige wallpaper with a leaf pattern covers the feature wall behind the bed, and a drum light hangs from above.

In the ensuite, a wall of blue glass tile evokes the ocean and a glass shower lets light flow in. It’s easy to imagine standing outside the shower and stretching your feet inside to clean sand from between your toes; it doesn’t feel like the nearest ocean is over 1,000 kilometres away.

“About a year after our house was complete, Larry and I were in the Napa Valley and dined at [The Carneros Inn] that architecturally was the epitome of our style – a modern take on a rural theme with a few unexpected twists thrown in,” says Lisa. “We loved it and it reconfirmed that our house was exactly what we wanted it to be!”