Down to the Core

Urban loft serves as ground base for travel-and-music-loving couple
By Carissa Halton | April 3, 2015

City lights steal and hide the illumination from our skyline / Let’s steal on back every star intact … We’re both in this together
The lyrics of “Boundless Rocketeers” by Audio/Rocketry are beautifully scrawled by local artist Justine Ma on a huge white wall in Jeff and Heather MacCallum’s loft. Located in Edmonton’s downtown warehouse district, the script ebbs and flows in three different shades of grey over a giant swath of wall.

Jeff, a carpenter with Innovative Woodworking Co., built an elaborate scaffolding system that allowed Ma to work above the open stairs that diagonally cut the 18-foot-tall wall. The text starts at the condo’s open pine rafters – which are occasionally interrupted by a red steel brace – and follows the stairwell to find conclusion at the lower steps.
“If we’d gotten married later, this would have been our wedding song,” Heather says of the song released by the Edmonton band in 2011. They were married in 2009 and, at that time, they lived in a Spruce Grove starter family home. There were some benefits to that house. It allowed them to host parties. Plus, it was the town in which Heather grew up. Jeff’s family was a short jaunt down the highway in Stony Plain. Over time, however, the commute into the city began to wear them down. In the mornings, Heather travelled to Edmonton for work as an accountant. In the evenings, they’d travel back into the city to watch a band.

She returned home late one night, fed up. They’d planned to head back into the city for a night out. Throwing her keys down in exasperation, she said, “This is it. We have to move.”

Jeff, a self-declared country boy and log home builder, surprised her by immediately agreeing. He went even further and promptly listed their house. It sold in a month. When they moved into a rental on 104th Street, in the heart of Edmonton’s downtown, their friends said, “Finally! What took you guys so long?”

After a year, they confirmed what their friends had always said: “We’re downtown people.” They began seeking out a place to buy. It took some patience before a two-storey loft came on the market. The unit is in the second phase of developer Gene Dub’s 107th Street condo development, Seventh Street Lofts, which began with the refurbishment of the historic John Deere factory.

Patience melted immediately when Heather saw the listing for the 2,100-sq.-ft.suite. “I knew this was going to be our house,” she said. They rushed over after work and wrote out their offer at the giant, granite-topped island. The island would soon become a central gathering space for many laid-back parties, and one of Heather’s favourite spots to relax, cooking after work. Conveniently, the loft is close enough to Yellowhead Brewery that Jeff can return any empty kegs on foot, with the help of a small dolly.

When they moved in, most of the walls were easy to cover. At the entrance, graphic posters fill reclaimed frames: Andrew Bird’s Vogue Theatre show in Vancouver, The Tragically Hip’s 1999 tour, and Pearl Jam’s iconic Yield tour. Other walls boast mementos from another of their shared loves, aside from music: Travel.

In the kitchen, a few steps away from the eye-drawing, double-wide, stainless-steel fridge, hangs a map. Framed by Jeff many years ago, coloured pins heavily cover the western seaboard of South America, the continent of Europe and the eastern coast of China, dribbling further south into Asia. The pins are colour-coded: Browns are those trips travelled together. Pinks, reds and purples are Heather’s alone and the few blues are Jeff’s solo trips.

A gallery wall at the entrance to the loft showcases colour-coded frames. Black-bordered photos represent
their four-month honeymoon trip “around the world;” yellow frames are “one-off” trips; and brown frames host photos from their most recent six-month journey. For that trip, they started backpacking in Antarctica and finished with a five-day sail from Colombia to Panama.

They work to travel, and the huge panorama shots on their living room wall inspire them to focus on the next big adventure. A panorama of sunlit glaciers in Antarctica is topped by a wide shot of the organized chaos that is Buenos Aires. The photos represent a breathtaking range of a trip that took them through wild, rural and urban regions.

The third panorama is a shot from one of Bolivia’s highest points, gazing down the dramatic spine of the Andes. It is a counterpoint to the view that greets guests when they turn 180 degrees to face the window. The rapidly rising arena is in full view; the sounds of downtown are a muted bass, save for the odd, whining emergency vehicle.

This living room is lit by standing lamps on tripods that nod to the traditional warehouse feel. Once the sun has gone down, the crystal chandelier above the dining room table casts a soft glow throughout the main floor. It lights Jeff’s record collection, reflects off a glass of red wine and continues through the thick glass that tops the coffee and side tables. The bases of these tables are heavily lacquered pine stumps. They are remnants from Jeff’s log-home building days. He built them for his mom but, when she moved, he happily settled them in his loft, where they now ground the space that yawns wide and high.

For a long time, the wall that rises above the stairway, leading from the living room to their suspended bedroom, remained blank. It overlooks the open living and dining room areas that, in turn, open out to a double balcony featuring a fire table and hammock. It’s bathed in morning sun and has the capacity to be a conversation starter, so the MacCallums took their time imagining what could grace it. The art had to be something that could complement the staircase braced by a unique, timber strand. Heavily lacquered, the strand’s compressed chipboard creates visual texture and physical strength.

They imagined until Heather came upon the curling calligraphy of an old high school friend, Justine Ma. After a couple of conversations – and a giant scaffold – the lyrics from the album Piloting a Vehicle of Audible Expression appeared on their wall:

As the moon breaks its last quarter / Grab a hold of my hand and squeeze it tightly, my friend … Have nothing to fear / We are the boundless rocketeers. 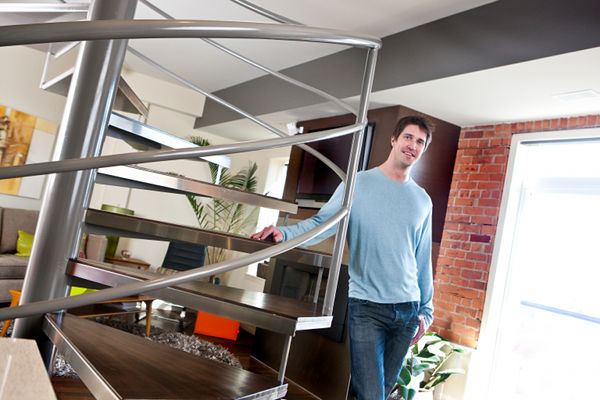 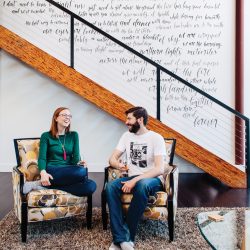 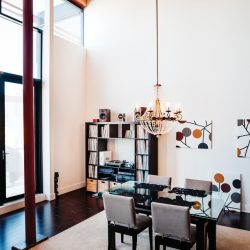 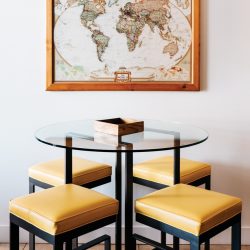 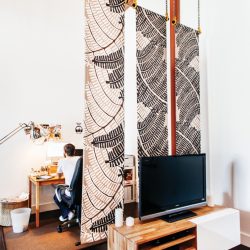 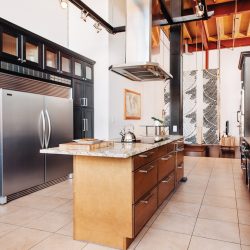 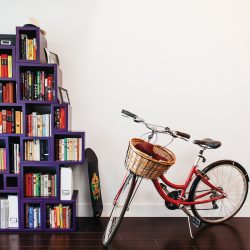 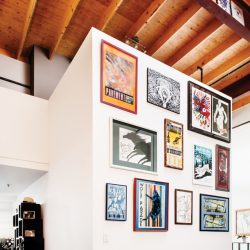