The architecture of the Ociciwan Contemporary Art Centre is designed to reflect the community
By Chelsea Novak | May 2, 2019 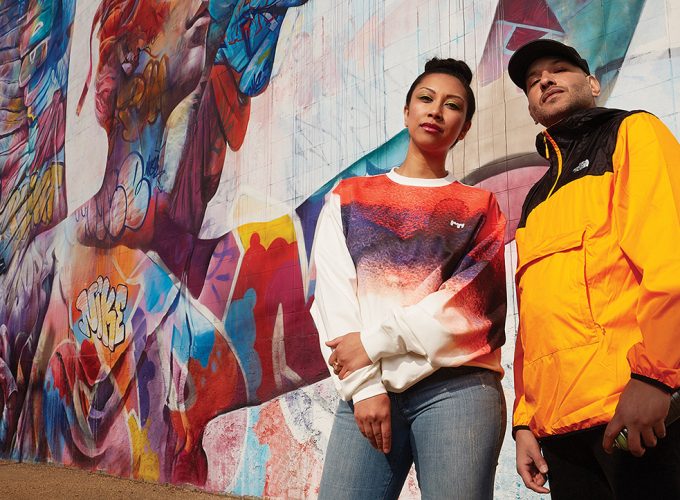 Culture Krylon Crew With Rust Magic, Annaliza Toledo and Trevor Peters are painting themselves a home in Edmonton Read More

Since 2014, when they first started brainstorming how to create support for Indigenous art, members of the Ociciwan Contemporary Art Collective intended to operate a space of their own. Now, with help from the City of Edmonton, that dream is coming true, and the collective will soon have a home that will literally reflect its surrounding community.

“We started to understand that we wanted to take on the task of paying our own rent, rather than discussing with institutions how to ensure that Indigenous content in exhibitions was worthwhile to have all the time — 100 per cent,” explains Tiffany Shaw-Collinge, one of the core Ociciwan members.

The Ociciwan Contemporary Art Centre, which will be located in a municipal building at 9604 101A Avenue in downtown Edmonton, will serve not only as a dedicated space to highlight Indigenous art, but as a community and gathering place.

Rockliff Pierzchajlo Kroman (RPK) Architects Ltd. has been working with the city and Ociciwan to see that the building meets those needs. In discussing the designs for the building, there were certain aspects of the architecture that were important to the collective for the way it would help create community and facilitate Indigenous practices. One of these was the façade.

Jan Kroman, a principal architect at RPK, says Ociciwan’s core members pushed to have it updated, though that wasn’t the architects’ original plan.

“We weren’t going to focus on the exterior, we were going to strip down the building … but for Ociciwan, they really wanted to make sure that the building stood out,” he says.

RPK’s solution was to cover the top half of the façade with numerous reflective panels of different shapes. Inside the building, the focus was on creating space where people would feel comfortable coming together.

“One of the issues is … making sure that a gallery space is not only physically accessible, but also just accessible, and that people actually want to come there, and feel comfortable coming,” says Erin Sutherland, an Ociciwan core member.

Ociciwan officially incorporated in 2015 with the mandate to support “the work of Indigenous contemporary artists and designers” and to engage “in contemporary critical dialogue.” Without a home to call their own, the core members have done this by partnering with other institutions to mount exhibitions showcasing Indigenous artists and their work. But recently, they decided it was time to move forward with the vision for a dedicated gallery and community space.

The main gallery space will be on the ground floor of the building, and there will be storage, prep space and a theatre room in the basement. The top floor is being renovated to include a community space, a workshop space, private offices, and a kitchen — an important aspect of the gallery.

“We were all really thinking around this idea of ‘home’ and a place to gather, and a lot of the way we gather as Indigenous people — and the way we were raised within gathering too in our individual lives — was surrounded by food,” says Becca Taylor, another Ociciwan core member.

Ociciwan held a smudging ceremony at the building in November, which Shaw-Collinge explains was to celebrate the collective getting a new home, but also to make sure everyone working on the project was in the right mindset.

“We wanted to make sure we smudged before construction started so that the hearts and minds of people were focused on the right kinds of things,” she says.