The Grand Hotel trades in its seedy rep for a hipster vibe
By Cory Haller | December 1, 2014

There are bikes outside of the Grand Hotel – lots of them. The bicycles – varying from road bikes to BMXs and cruisers, to chopper-style low-riders and fixed-geared cycles – are a new and seemingly out-of-place sight outside of the 110-year-old relic which, up until recently, housed the sketchy Richelieu Pub. A healthy mix of hipsters, rockers, artists and a plethora of young urbanites flow in and out of Denizen Hall, the newly renovated bar space of the Grand Hotel, and none of them are the least bit concerned for the well-being of their two-wheelers.

Inside, the 300-seat bar buzzes with the sound of music, conversation and the pinging of retro arcade machines such as Dig Dug, Marvel vs. Capcom, Teenage Mutant Ninja Turtles and AC/DC Pinball. The young crowd surrounds a massive wooden bar in the centre of the room, and those not seated at tables or the newly added leather booths are off playing pinball or games in the “bar-cade” section – the area which once held only a few VLTs. And while the VLTs are still there, they are clearly not the draw for this crowd, as they sit untouched in the back corner only mere steps away from machines that offer no payout but a rush of nostalgia for the millennial crowd.

But with all that has changed at the Grand Hotel since the building came under the new ownership (that of Urban Sparq Hospitality Group, the company behind the Pint, the Buckingham, Knoxville’s Tavern and the Rack) last year, much is still the same – for now at least.

Al Gothjelpsen, managing partner and director of operations of Urban Sparq, says, though his group bought the hotel last year, figuring out what to do with it was a long process. And renovations to the building have been stage by stage. “At first, we didn’t really know what we wanted to do with it,” says Gothjelpsen. “We just wanted this old historic thing that would have disappeared or become another glass building.”

Gothjelpsen points out that the building would likely have been demolished, and the site would have become part of the condominiums under construction next door, had he and his partners not bought the building when they did. With the rise of the arena development only a block away, and the inevitable demolition of the Greyhound station across the street, Gothjelpsen and his group saw an opportunity for something eclectic and historical in the heart of the new downtown. After all, taking old buildings and repurposing them as nightlife destinations is old hat for Urban Sparq, as the group had done it before with the building that became Oil City Roadhouse and, later, Knoxville’s on Jasper Avenue. “We wanted to save the building,” says Gothjelpsen. “This is little spot of our heritage that will be surrounded by glass towers and Katz-ville. I think that’s worth saving.

“The Grand, with whatever our concept is, we know there will be nothing like it in the arena district. They’ll have the mainstream bars – the Joey Tomatoes and the sports bars and that sort of thing – but our idea is that this is very unique location and we want to build something that will be an institution rather than another place to get a nine dollar beer.”

But what is the concept of the Denizen? Gothjelpsen himself says that it’s unlike the other bars in his rsum, though it’s more closely related to the eclectic Buckingham on Whyte Avenue than the Pint or The Rack. The trademark aesthetic of the Buckingham runs throughout Denizen Hall – the same sort of kitschy velvet painting artwork on its the walls. But a sense of history is there as well. Vintage signs mark the men’s and ladies rooms, and classic ’70s lights hang. They were found in the basement of the building, and are now suspended from the ceiling of the pub.

But with added touches such as the velvet painting of the cartoon character, Snoopy, a giant buffalo head and other taxedermied animals hung from its walls, the “southern comfort food” menu developed by Elm Caf’s Nate Box and the renaissance-style ceiling mural designed by Trevor Peters, the place certainly does have a vibe that is hard to peg down. You have a recipe that, if not considered hip, may be considered hipster.

And Gothjelpsen remains tight-lipped about the future of the hotel itself. He will not confirm or deny that the long term plans for the building include something similar to the Drake in Toronto – a venue that, in the beginning, was a scuzzy bar, which hosted hardcore shows in the basement before transforming into a cultural centre with the addition of a boutique hotel and a top-end restaurant. But, as he discusses plans to try and save the exposed brick underneath the siding that was added to the hotel over the last 110 years, one can’t deny that the vision seems to line up with those concepts. And when he does indicate that the hotel will gradually shift to encapsulate the culture of a changing downtown, and may include a coffee bar where the convenience store now sits, Gothjelpsen’s subtle hints at a “magical lifestyle building,” start to make sense.

But, in the meantime, he is hesitant to say more.

Perhaps it is the ongoing discussion about gentrification in the downtown area. It’s a subject that Gothjelpsen is very passionate about. “All the sudden there’s a lot of negativity about us doing this great development,” says Gothjelpsen. “About us taking this horrible business that was here at one time and then all of the sudden people started defending it like we were displacing all of these people.”

He has a point. The establishment itself has an already unsavoury reputation that would certainly not help a new business off of the ground. TripAdvisor.ca, for instance, is filled with such glowingly titled reviews as “the ugliest, dirtiest hotel in entire Canada,” “Do not go here,” “Do not stay at this hotel,” and “Worst hotel ever,” and is ranked 89 out of the 90 Edmonton hotels on the site.

“For all that the Grand is, it’s one of the most successful hotels in Edmonton in the way that it has one of the lowest vacancy rates. But, in the end, any Edmontonian would be lying if they said that they don’t know that the bus station and a lot of the public services around there service crime and a lot of criminal activity,” says Gothjelpsen.

According to the Edmonton Police Service’s crime map, over the last three months prior to publication, the area near the intersection of 103rd Avenue and 103rd Street has seen plenty of incidents. There has been a sexual assault, four thefts from automobiles, one robbery with an offensive weapon, a break and entry, an assault, an assault with a weapon and an aggravated assault.

Even downtown-savvy pedestrians have long been cognizant of the idea that it’s best to walk around the Grand Hotel rather than by it, no matter the time of day. But Chris Buyze, the president of the Downtown Community League, says that the area is quickly changing. “I think it’s been good to have new owners, who are actually willing to put some money in the building, because I think we’ve seen that building stagnate for a really long time,” says Buyze, “I think that the Grand Hotel kind of represented a business that catered to some of those people who were passing through Edmonton through the bus station and I think that’s why some people are happy to see it changing.

For Gothjelpsen, the idea of turning out the bad seeds was important, although he didn’t want to displace the loyal regulars – the ones with a long loyal history with the location. “There’s a group of dudes who have been drinking in their since 1974 and they are awesome dudes, and they are their own guys with their own stories.” he says. “The funny thing is, these people are still Edmontonians. It’s easy for us as taxpayers to turn around and say ‘well, screw these people’ but they are still Edmontonians and we still need to find a place together.” And while a group of eight 70-year-old regulars couldn’t provide a viable business on their own, Gothjelpsen believes they still have a place in the Denizen Hall.

But, as the neighbourhood changes, Buyze sees an inevitable end to the low-income housing the Grand provides – not that he blames the ownership of the hotel. Nor does he believe that the gentrification argument surrounding the arena is a valid one. “I find it somewhat suspect for people to talk about gentrification because I don’t really think they are thinking about the context in which all this development is happening,” says Buyze. “Where the arena, and all the associated private developments, are being built were essentially surface parking lots. I mean you are not displacing people from that -you are displacing cars.” He adds that, because the businesses in the area have to adapt to the rising land costs in the area post-arena, the idea of keeping a low-cost suite hotel would be next to impossible.

Gothjelpsen has a policy that there will always be a beer on tap in the price range the old boys are accustomed to. And, as the evening comes to a close, one can’t argue that Urban Sparq’s vision, of “a people’s pub” is realized. As the cover band plays a rendition of OutKast’s “Hey Ya!” to close out the evening, the hipsters, and the blue-collars, and the rockers – the denizens of Denizen Hall – exit the pub. Some grab their bikes, some walk or hail a cab and some turn the corner and head into the hotel entrance.

“It’s really what I believe Edmonton wants and needs. Edmonton is the most unique city I have ever been to, and I live here,” says Gothjelpsen. “The one thing I love is that Calgary wants to be Toronto and Toronto wants to be New York. But Edmonton – I think Edmonton wants to be Edmonton and I think that’s pretty cool. And as the city grows we want to keep it cool. That’s what we’re doing here.” 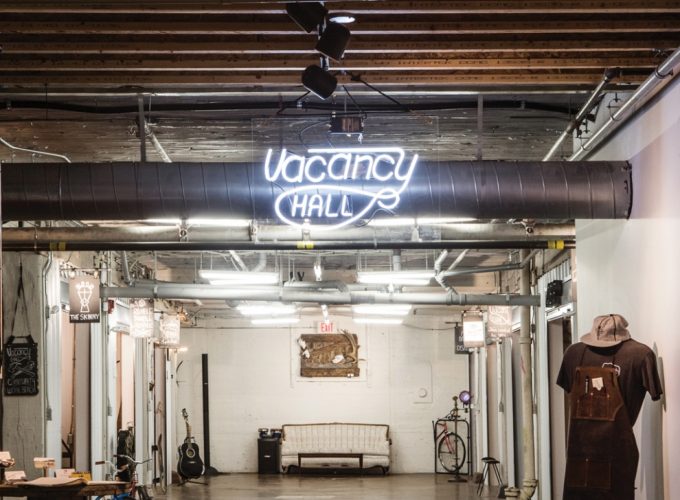