Even if Bond ordered them wrong, Martinis are still the epitome of cool.
By Cory Haller | March 1, 2015

When many of us think of a martini, the first image that pops into mind is that of swinging secret agent James Bond. Though the smartly dressed British super-spy had many different –ahem– loves, he was notoriously faithful to at least one drink: The martini, which Bond always ordered with specific instructions, “shaken, not stirred.”

The quote reverberates through the pop-culture hive mind to this day, but according to Ramon Miranda, the head bar man at Corso 32 and co-owner of Color de Vino, it’s simply wrong.

“A true martini should always be stirred,” says Miranda. “A true cocktail is the sum of all of its parts. So a cocktail is alcohol, bitters and sweets. A martini is two parts gin to one part dry vermouth, and it can be topped with either two olives or a twist of lemon. And it must always be chilled. That’s what makes a classic martini.”

Though the origin of the martini is wildly disputed, purists can agree that it was first made popular in the bible of bartenders everywhere: Harry Craddock’sThe Savoy Cocktail Book, published in 1930. The London, England, bartender’s book was a walk through prohibition cocktails, and one of the most popular drinks therein was his take on the dry martini.

Since then, the drink has been associated with classy ladies and gentlemen everywhere – including James Bond- and is still wildly popular. Even though the drink no longer graces every cocktail menu, it’s generally because most bartenders know what it is and how to make one.

Will the Real Martini Please Stand Up?

So what of the cocktail of Her Majesty’s number one spy? “That wasn’t a martini. What James Bond made popular was a Vesper [named for the double-agent in the first Bond novel,Casino Royale] , which is gin, vodka and lillet,” which is an alternative to dry vermouth, though sweeter, says Miranda.

And that’s not the only imposter to the martini name. As anyone who lived through the cocktail menus of the ’90s can attest, there are worlds of faux-tinis nipping at the notoriety of the original. Chocolatinis, lemondrop martinis, appletinis and peppermintinis, among others, surged in popularity throughout the ’80s and ’90s, in part because of how sweet and easy to drink they were. Add to that the surging popularity of the cosmopolitan and it seemed as if any drink served in a martini glass was fair game to the name. But the majority of these faux-tinis were vodka-based, and the progeny of the Kangaroo cocktail (a.k.a. the vodka martini).

Variations of a Classic

Even in the beginning, the martini recipe was being adjusted to taste. Today, it is still one of the most popular cocktails. “People who love martinis will always order a martini,” says Miranda. “And people who order martinis are very specific as to how they like them.”

Dry Martini: Made with less vermouth

Bone Dry: No vermouth is added whatsoever (though Miranda argues that this is merely “a chilled spirit”).

Dirty Martini: Same as the classic, but with a bit of olive brine added to the mix.

Burnt Martini: The glass is rinsed with Scotch prior to pouring in the cocktail.

Pour the chilled gin and vermouth into a mixing glass filled with ice cubes, stir for 30 seconds. Strain into a chilled cocktail glass. Garnish with the olives or lemon twist. 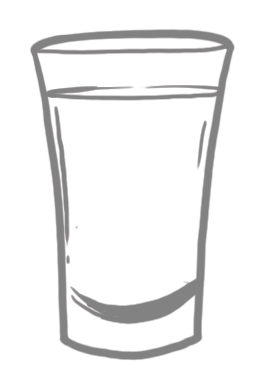 Food Cocktails: An Acquired Taste Enjoyed alone or with a friend, the Negroni is a drink meant to slow things down. Read More