From the Clay Oven

A buffet filled with indian flavours.
By Caroline Barlott | February 12, 2010

A chef stands at a station, pouring a circle of batter onto a steaming hot pan. The beige circle bubbles as he tosses small pieces of potato and onion into the middle of it. Within seconds the chef has rolled the dough into a crpe, or dosa, as it’s traditionally called. The delicate dosas have crispy edges and a delicious interior – a favourite in Indian cuisine, they’re also my favourite at Moksha Restaurant’s buffet table, found right at the front and centre of the space.

The buffet is the focal point for good reason – it’s one of the most diverse and extensive buffets I’ve seen, even compared to other Indian restaurants, which are known for their variety and freshness.

At Moksha, the buffet is all about fresh ingredients and lots of them; it’s not an attempt to fill you up on cheaply made dishes. The number of different items doesn’t take away from the individuality of each dish. And there is some cross-over between the buffet and the menu, which includes vegetarian entrees and items cooked in the tandoor (clay oven), along with chicken, beef, goat and fish dishes.

The tandoori chicken is one entree that’s found both on the menu and in the buffet, and seeing as it’s a standby in Indian cuisine, it’s not a surprise. It has a slightly smoky flavour due to the fact it’s marinated and fired in a clay oven.

If you go for the buffet, a fresh basket of naan is brought to your table, which you can use to scoop up the spicy sauce of the fish curry, which is punctuated by substantial chunks of protein. If you stick with the menu, you can try a similar prawn curry, which can be customized to your own spice tolerance.

Several goat dishes are on the menu including the saag goat, prepared with spinach, and the goat vindaloo in a red vinegar sauce. Meanwhile, the buffet features goat lazeez, with meat that easily falls off the bone into a mild gravy. (9266 34 Ave.,780-468-9500, moksharestaurant.ca) 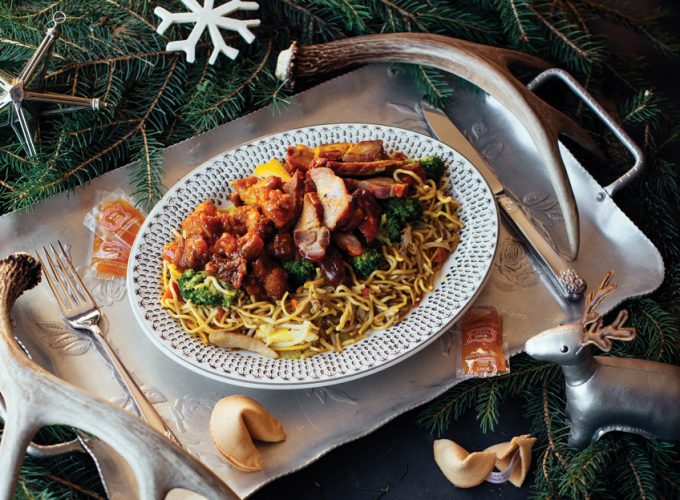 Food The Yuletide Food Guide If you can’t have a home-cooked dinner on December 24th, these restaurants can help out. Read More